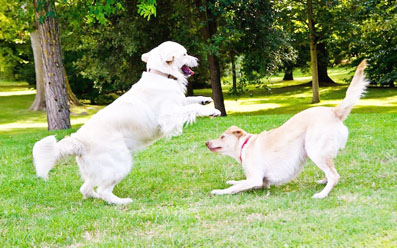 JERUSALEM: Researchers have developed a novel canine vest that can be used for delivering remote commands to dogs for use in search and rescue, assisting disabled handlers, and other service animal applications.

Haptics technology simulates the senses of touch and motion, which is especially helpful in a remote operation or computer simulation where the user is not able to interact with and feel physical objects, researchers said.

“Our research results showed that dogs responded to these vibrotactile cues as well or even better than vocal commands,” said Amir Shapiro, from the Ben-Gurion University of the Negev (BGU) in Israel.

“Our current proof-of-concept study shows promising results that open the way towards the use of haptics for human-canine communication,” Shapiro said.

The modified, commercially available mesh canine vest contains four small vibrating motors positioned over a dog’s back and sides that can be used to train or direct dogs to respond to different vibrations sent via wireless remote control.

The handler can elicit different commands by controlling the site and duration of vibrations, researchers said.

The haptic vest may also be used with existing dog training devices that detect posture and automate reward systems, they said.

“Integrating devices will allow us to further advance the potential of fully or partially autonomic dog training to assess general behaviour, responsiveness to commands and the effectiveness of rewarding dogs for desired behaviour,” said Shapiro. (AGENCIES)