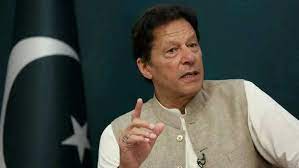 Islamabad, July 30: Former Pakistan Prime Minister Imran Khan on Saturday criticised Army chief General Qamar Bajwa for seeking help from the US over a much-needed IMF bailout for the country, saying it is not the job of the head of the military to deal with economic matters and his intervention means the country is getting weaker.
Bajwa reached out to the US for the early disbursal of the nearly USD 1.2 billion loan from the International Monetary Fund (IMF), the official media reported on Friday, as the cash-strapped country faces the ignominy of a possible debt default due to its depleting foreign exchange reserves.
Bajwa spoke over the phone with the US Deputy Secretary of State Wendy Sherman earlier this week and also appealed to the White House and the US Treasury Department to push the IMF to immediately expedite the nearly USD 1.2 billion loan, state-run news agency Associated Press of Pakistan (APP) reported, quoting sources in the Pakistan Army.
Commenting on the report, the ousted prime minister said it was not the Pakistan Army chief’s job to deal with economic matters.
Khan said that this shows that neither the foreign governments nor the IMF trust the government and “that is why the army chief took the responsibility,” the Dawn newspaper reported.
“If the Army chief was contacting the US and seeking help, it means that the country was getting weaker,” he said.
However, he added that the US’ help would not come without any reciprocal demands and added that he feared “those demands would compromise Pakistan’s national security”.
Linking the current economic crisis with political instability, Khan, the chairman of the Pakistan Tehreek-e-Insaf (PTI) party, said that when his government was toppled as a result of a conspiracy it led to political instability that tanked the economy.
Khan has alleged that Donald Lu, Assistant Secretary, Bureau of South and Central Asian Affairs in the US Department of State was involved in the foreign conspiracy to topple his government.
“You have seen that everything has been downhill since then. [All economic indicators, be it the] industry, tax collection, exports or remittances, have gone down,” he said while adding that the only way to bring back political stability was free and fair elections.
The US has repeatedly dismissed Khan’s allegations.
“Those sitting in power are afraid of the elections,” he said, recalling that when he was ousted from the office, he did nothing except for approaching the public. (PTI)