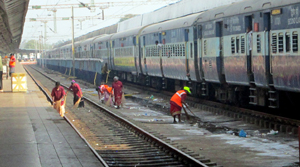 Every department, be it pantry, bed rolls etc., will have separate WhatsApp groups, in which status report of cleanliness will be uploaded on a daily basis.

“WhatsApp groups have been created for train and pantry cleanliness, bed rolls and functionality of air conditioners in trains. Photographs are being uploaded in these groups for monitoring by senior officials,” Northern Railway General Manager Vishwesh Chaube said.

The zone will also soon commission an automatic coach washing plant at the Hazrat Nizamuddin railway station which can wash a 24-coach train thoroughly in under eight minutes.

The plant, which is currently undergoing trials at the station, is being set up by the Northern Railways at a cost of Rs 1.6 crore, he said. (AGENCIES)