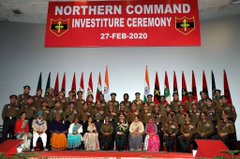 Kanika Rane, the widow of Major Kaustubh Rane, who was martyred in an encounter with terrorists on the Line of Control (LoC) in August 2018, received the Sena Medal awarded to her husband.

She has joined the Army after her husband’s death.