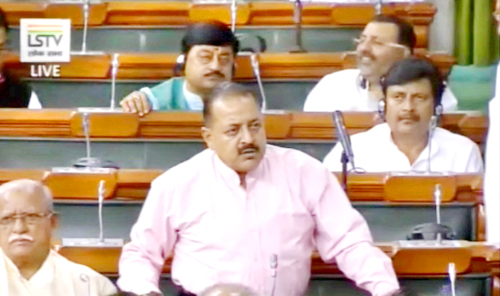 Excelsior Correspondent
NEW DELHI, Aug 1: As per a new provision approved by the Union Cabinet, all the new projects in Northeast will receive 100% Central funding, thus replacing the earlier funding pattern of 90:10 wherein, 90% funding was done by the Centre and 10% by the respective State Government.
In reply to a question in the Lok Sabha today, Union Minister for Northeast (DoNER), Dr Jitendra Singh stated that each of the non-exempted Central Ministries in the Government of India is required to earmark 10% of its budget for the development of the North Eastern region. In addition, an assessment of various socio-economic challenges and infrastructural constraints faced by the North-Eastern region, is duly undertaken from time to time.
As per the reply, the North Eastern Council (NEC) is currently funding construction of roads up 10911.58 kms in the region and installation of Power Plants with a capacity up to 694.5 MW and transmission / distribution lines up to 2540.41 kms. In addition, the North Eastern Council has also taken upon itself the responsibility to improve the infrastructure and major airports in the NE region as well as to create infrastructure for education, healthcare, agriculture, horticulture, tourism, industries, etc.
Setting up of regional institutes is another initiative undertaken by the North Eastern Council. This is part of the constant focus of the Modi Government on the development of the North-Eastern region through social and physical infrastructure development, human resource development, capacity building, etc. As for the funding, the development projects undertaken by the different States of the North Eastern region are supplemented through a liberal funding pattern from the Centre, aimed at promoting sectoral development schemes as well as area-specific development packages.

Time to exert more pressure on terrorists, their supporters: DGP