Excelsior Correspondent
UDHAMPUR, Oct 19: Panic gripped Sanasar in Kud area of Chenani Tehsil after a nomad woman was attacked by a leopard and left seriously injured, here this morning.
The victim, identified as a Shamam Begum (30) wife of Gulzar Ahmed, resident of Falata Udhampur, was attacked by the leopard in a forest area when she was returning to home from Sanasar after grazing domestic animal.
The injured woman was shifted to District Hospital Udhampur, where doctors referred her to GMC Hospital Jammu in view of her serious condition.
Locals said that they reported the incident to the Police and Wildlife Department officials apprising them of their concern about threat to human lives and cattle. They appealed the Wildlife Department officials and district administration to capture the leopard or take appropriate action to evict it to forest. 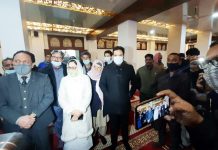 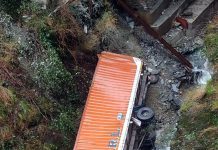 Driver injured as truck plunges into gorge on NH

‘Hesitation’ of parents impacting vaccination pace for 15-17 in Srinagar

Claims of Good Governance not matching  with  ground realities: CPI(M)

Grant benefits of SRO-59 to employees of Jammu Division: CAT