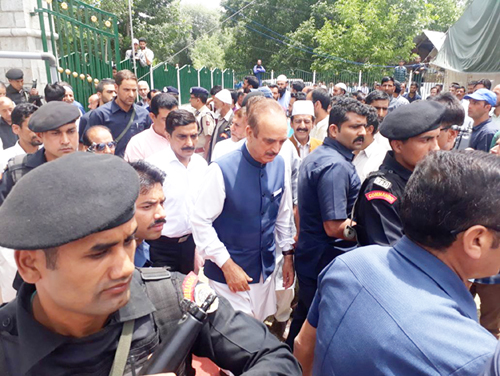 Excelsior Correspondent
SRINAGAR, June 18: Former Chief Minister and Congress leader, Ghulam Nabi Azad today said that situation in Kashmir is very tense and nobody is safe here.
Speaking to reporters at Kreeri in district Baramulla on the sidelines of fourth day of journalist Shujaat Bukhari who was killed by gun men outside his office last week, Azad said: “The situation is very tense nowadays and nobody is safe here.”
Click here to watch video
The Congress leader said that Bukhari’s contribution for normalizing situation in Kashmir is more than that of the politicians. “He will always be remembered for his contribution in normalizing situation in J&K more than the politicians”, he said.
Azad said that Bukhari was against all kinds of violence. “Along with journalism he always wanted peace in J&K and was against all kinds of violence as he believed that things could get resolved by peaceful means”, he said.
The former Chief Minister said that his death is loss to people of Kashmir. “I have seen him in rescue efforts in 2014 floods and helping people to evacuate, that I have seen for the first time from a journalist. So, his death is an unbearable loss not only to his family, but to the people of Jammu and Kashmir as well”, he added.
Azad said that Bukhari was an excellent social worker as well. “To restrict the personality of Shujaat Bukhari to journalism only would be an injustice. No doubt he was a known journalist but above that he was a great human being and an excellent social worker”, he said.
“His hold on journalism covered both the English and Urdu fields. When he used to write for The Hindu a national newspaper, he made his name there and continued the same when he started his own English and Urdu newspapers”, the Congress leader said.
Azad paid condolences to the family of Bukhari at Kreeri on the fourth day. Besides Azad, large number of people visited his residence and offered condolences.
Those who attended the fourth day function and paid tributes to the journalist include Government of India’s special representative, Dineshwar Sharma, Minister for Higher Education Imran Ansari, Minister for Tourism Tassaduq Mufti, Minister for Education Choudhary Zulfkar Ali, former Minister Abdul Haq Khan, Secretary Sports Council Waheed Parra, former Minister Farooq Andrabi, senior Congress leader and former Union Minister Saif-ud-Din Soz, former Air Vice-Marshal Kapil Kak and Minister for Agriculture Ghulam Nabi Hanjura.