E-Paper
Home National No party will get majority, Cong will forge alliance for ‘UPA... 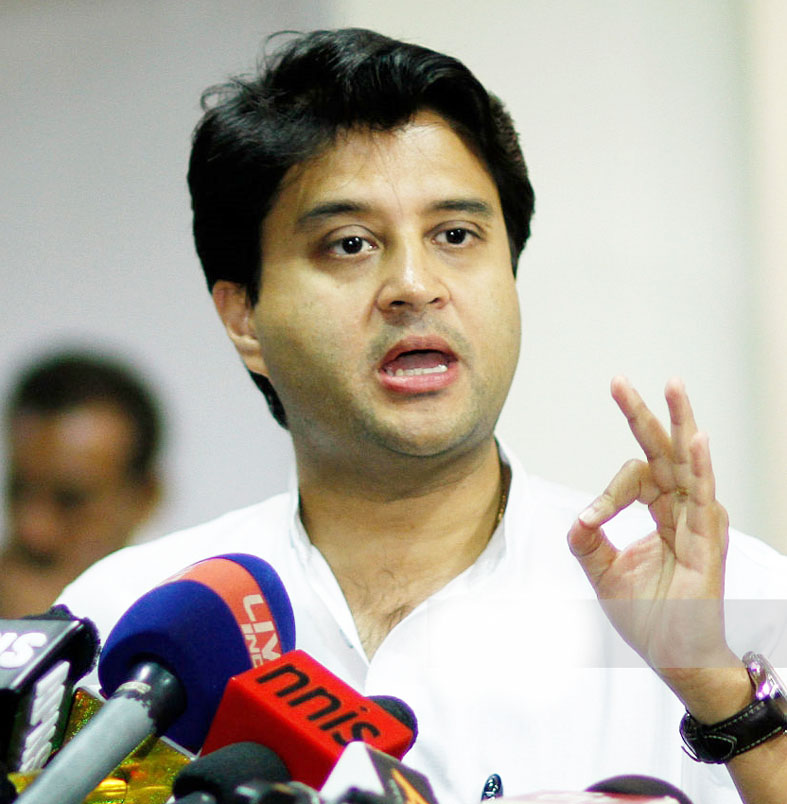 PICHHORE (MP), May 8: Predicting that no single party will get a majority in Election 2019, Congress leader Jyotiraditya Scindia says his party will forge a strong alliance of like-minded entities to create a “UPA plus plus” Government at the Centre and end five years of “injustice”.
The days of Coalition Governments are here to stay, the Congress general secretary, who is seeking a fresh mandate from the electorate of Madhya Pradesh’s Guna-Shivpuri seat for a fifth term, told PTI in an interview.
Asked about the Congress’ chances after five rounds of the seven-phase elections, Scindia said he never quantifies the number of seats but can see that the mood of the people is against the present BJP dispensation.
“My assessment is the Congress party, the UPA Government will form the Government at the Centre and I am very confident of our performance as a coalition,” he said.
“I think the people of India are waiting for the moment to respond to the injustice that has been meted out to them by the Narendra Modi government over the last five years,” Scindia told PTI during his election campaign in the region.
It goes without saying that no single party, be it the BJP or the Congress or any other party, is going to get an absolute majority, he said
“It will be a coalition government at the Centre as it is now or has been for the past 25-30 years in the country,” the 48-year-old said.
“That being said, I firmly believe the UPA will be able to stitch together a very strong Coalition Government,” he added.
Asserting that he is not an astrologer, he said he predicted that the Congress and its allies will put together a “very strong performance”.
“We look forward to putting together a strong coalition government with like- minded parties which will be the UPA or UPA plus plus,” he said.
The United Progressive Alliance, formed after the 2004 polls and led by the Congress, ruled the country for 10 years with Manmohan Singh as the prime minister and Sonia Gandhi as its chairperson.
BJP’s Nationalism campaign
The son of the late Congress stalwart Madhavrao Scindia said the Bharatiya Janata Party was harping on subjects related to nationalism as it had nothing to say on development issues.
“That’s very understandable. Because we have always come on the plank of economic growth, development and progress. We have come on the plank of alleviation of poverty.
“The BJP has nothing to talk about in its last five years of governance. The last time they were in Government, they talked about India Shining. And India was shining only for the BJP but not for the rest of the country,” he said.
This time, Scindia added, they came up with the slogan ‘acche din’ which applied only to a sub-section of a limited coterie of the BJP.
“If you ask the common worker of the BJP or even its MPs, not even their ‘acche din’ have arrived,” the former Union minister said.
He recalled the mathematical concept of LCM (least common multiple) to say, “The LCM for the BJP is Hindutva and phoney rashtravad (nationalism),” he said.
NYAY
The Congress leader, who holds sway in the Gwalior-Chambal belt of Madhya Pradesh, said he didn’t agree that the party’s minimum income scheme (NYAY) promise to provide Rs 72,000 per annum to about five crore poor households has not clicked with the masses.
“The judgement will come on (counting day) May 23. So, let’s wait. I am very confident the people of India have understood the concept of NYAY. It is not a very difficult concept,” he said.
Rahul Gandhi as PM
An important member of Rahul Gandhi’s core committee, Scindia said the Congress president is the obvious PM choice for them but a final decision will be taken by the UPA’s constituents.
“We are not like the BJP which believes one man, one way or the highway. We believe in working together and taking everyone along,” he said.
“The Congress party is one constituent of the UPA and as far as Congress party is concerned, our voice is very clear that it should be Rahul Gandhi but it will be a collective decision,” he said.
“The Congress took the country forward in 10 years of the UPA by delivering a 7.8 percent compounded annual growth rate of over a decade which is a stupendous achievement that lifted about 25 million people out of poverty. This government has just taken us 20 years back,” he said.
So, it’s a twin purpose — it is to salvage our democracy and Constitution and freedom of liberty and rights and to take the country forward, he added.
PM’s comments on Rajiv Gandhi
Modi’s recent comment on the late prime minister Rajiv Gandhi, calling him “corrupt no 1”, was distasteful and sad, Scindia said.
“It is very hurtful to see that the person occupying the highest chair of this country talking about another person who occupied that same very chair and who is no longer in this world and cast slurs on that person. It does not behove someone who occupies that chair and sad to see that this is the level of politics that Mr Modi has come down to,” he said. (PTI)