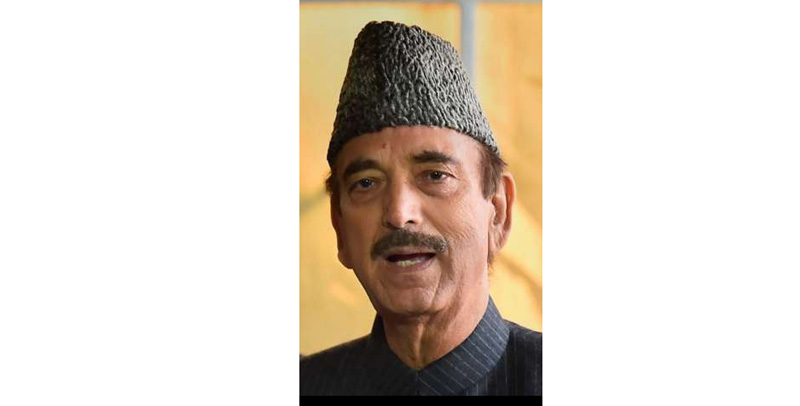 JAMMU, Dec 5: While claiming that ‘anything can happen in politics anytime’, former Union Minister and senior All India Congress Committee leader, Ghulam Nabi Azad today did not rule out the possibility of framing a new political outfit in near future.
Amid speculations of creating new party and holding several impressive rallies across Jammu and Kashmir, the veteran Congress leader said that he has ‘no intention’ to float a new party but ‘cannot predict’ the future in politics.
Azad had been addressing series of rallies across J&K which witnessed impressive response and also fuelled speculations that he is forming a new party. Adding much to the speculations, about two dozen Azad’s loyalists have also resigned from Congress posts recently.
“Rallies were meant to revive political activities that had stopped after Jammu and Kashmir was stripped of its Statehood and special status. There was no political activity for the last two and half years in J&K. No connectivity of the leaders with the public. I felt the need and took the lead but now the others are also following,” Azad told reporters here.
When asked whether he was going to float his own party, Azad remarked, “No one can say what will happen next in politics, like no one knows about death. In politics, no one can predict what will happen next, but I have no intentions to form a party.”
Stating how there is no place for criticism today Azad said, “No one is challenging the leadership. Perhaps, Indira Gandhi and Rajiv Ji had given me too much freedom to question when things were going wrong. They would never mind criticism. They would not see it as offensive. Today, the leadership sees it as offensive,” he added.
“Indira Gandhi had once told me ‘keep it up’ when I refused to appoint two people she recommended as general secretaries in the Youth Congress and when Rajiv ji joined politics, Indira Gandhi called both of us and told Rajiv ji that Ghulam Nabi can even says no to me, but that ‘no’ doesn’t mean disobeying or disrespect, that’s for the good of the party. Today, no one is ready to listen to that no. For saying no, you become nobody today,” Azad remarked.
Senior leaders of the party, who didn’t want to be quoted said, “the party leadership must learn to trust its ‘war horses’. It should not isolate or sideline senior leaders who have stood through thick and thin with the party. They have given blood and sweat to the party. The party must utilize their services to chalk out new political strategies. Azad had also accomplished some challenging tasks assigned to him by the party high command in the past, specially in Maharashtra and Karnataka”.
While referring to the recent stance of the party high command to promote ‘Young Turks’, leaders said, “youngsters Jyotiraditya Scindia, Youth Congress president Ashok Tanwar and Mahila Congress president, Sushmita Dev left the party. Even senior party leader Jitender Parsad quit and joined BJP, and later he became the minister”.
The senior AICC leader claimed that he also wanted to quit politics, but decided to continue for lakhs of his supporters. He said the people did not allow him to do so. Azad said he wanted to revive political activities in J&K, and for this reason, he was holding series of rallies here and would continue to do so.
Azad reiterated the demand for restoration of the Statehood of Jammu and Kashmir before Assembly elections, saying the bureaucracy is no match to popular rule in fulfilling the aspirations of the people.
He also added that the people of the country are suffering due to the price hike of essential commodities and the Congress has been fighting over it within and outside Parliament. Jehad (holy war) is not fighting against another religion. The real ‘Jehad’ is to wipe out poverty and unemployment which is our biggest enemy, rather than any leader or party, Azad said.
“The ‘war’ should not be against any religion but to wipe out poverty and unemployment which is our real enemy,” the former J&K Chief Minister maintained.