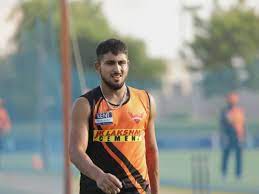 Jammu and Kashmir pacer Umran Malik – known as the Jammu Express, was recently named in the India A team for the forthcoming South Africa tour. Several politicians visited Umran’s house to congratulate him. Kavinder Gupta, the former Deputy Chief Minister, while speaking on the occasion said that the young boy has set an example for others to perform and achieve the same feat in the coming times as there is no dearth of talent in the UT in general and in Jammu in particular.
Shiraz, a young twenty-year-old boy from the mountainous tehsil of Mandi in Poonch district of Jammu division of the UT, couldn’t agree more with the former Deputy Chief Minister. He, like several others, has the talent, dedication and passion to pursue cricket but the infrastructure in these far-flung regions doesn’t support his dream. Here, the youth have to often wait for the harvesting season to end to use their fields as a playground. Alternatively, they have to travel long distances to pursue their passion.
Shiraz has to travel to Poonch town, approximately twenty kilometres, to practice cricket. Expressing his concern, he said, “Every single moment is precious for a student. We travel long distances and are able to play only for an hour. If we stay back for long, we might miss the cab for our return.” Also, frequent travel to Poonch costs him too much.
So far, no one from Mandi or the surrounding areas has been able to play at the state or national level. Without access to quality sports infrastructure, many youngsters are wasting their talent. Farooq Ganai, 28, and Mohammad Akram, 29, from Azamabad village in Mandi, were interested in pursuing a career in sports. Like the other players from the region, they made great efforts to learn and practice. However, the lack of proper facilities and equipment in the region didn’t support their endeavour. “Talent of such youth needs to be nurtured, and this can happen only when stadiums and grounds are constructed,” they lamented.
In the villages of Mandi, one can spot young boys playing on the riverbanks, amidst innumerable rocks. School yards also act as an alternative, but the facilities are limited; compelling the students to travel to Poonch where they have space and better equipment. For students residing in villages like Loran and Sawajian that are located further away, it becomes even more difficult to continue their interest in sports.
If boys are facing such challenges while pursuing their dream in a field largely dominated by men, one can only imagine the kind of struggle young girls have to go through. Eighteen-year-old Saba, a resident of Mandi, is interested in wrestling and wants to pursue a career in it. Informing about the dire shortage of facilities and opportunities, she said, “Girls are barely supported in participating in sports. While schools have nominal sports facilities, travelling to Poonch to practice every day is far from reality. Seeking permissions from parents who worry about safety of a girl child and would rather want their daughters to learn household chores than travel alone to Poonch, is next to impossible here. Constructing playgrounds or stadiums in Mandi will make it easier to convince parents,” she said.
In 2019, an indoor stadium was proposed to be built in Mandi Block. Its construction is ongoing in Azamabad village and will nurture the talent of youngsters interested in sports like table tennis, Kabaddi, wrestling, Judo, Karate, carom, and boxing. The struggle for cricketers and those interested in other outdoor games, continues.
Shamim Ahmed Ganai, the Chairman of Block Development Council, Mandi, while informing about the construction of the indoor stadium said, “We worked hard for the approval of the indoor stadium and had to visit Delhi several times. After a lot of effort, the stadium is being constructed at a cost of Rs. 38.5 million.”
The construction of an indoor stadium in this remote area has given youngsters like Shaba and Shiraz a hope for a better future. Games like cricket and volleyball are usually played with great enthusiasm and passion in Mandi. With the construction of playgrounds facilitating better infrastructure, this passion can be turned into a successful career option.
—Charkha Features