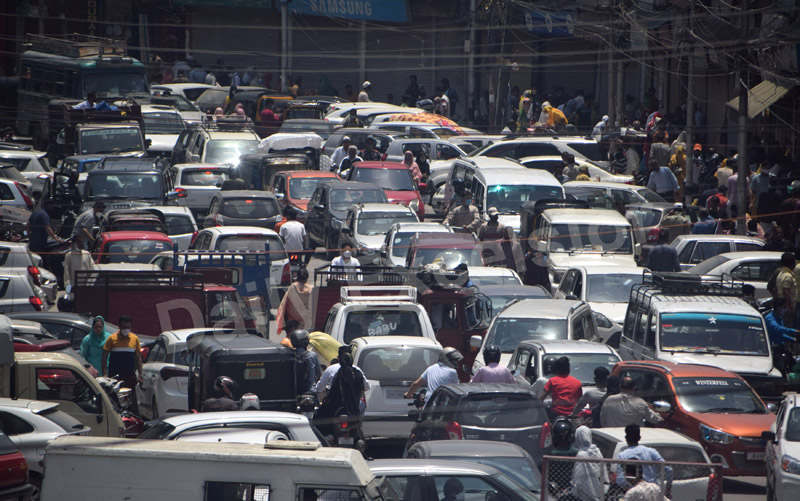 JAMMU, Feb 27: Though tall claims are being made to turn Jammu into a Smart City, there seems to be no end to the traffic chaos in the City of Temples as the problem is compounding day by day especially on interior city routes due to varied factors.
The people facing the routine traffic chaos even question will this problem ever end even after Jammu turns into a Smart city some day?. The increasing traffic congestion adds to woes of common man especially the Government and private sector employees, students and traders going to their routine work daily. The problem takes a critical turn during morning and evening hours when the huge rush is seen on the city roads with a long bee line of vehicles everywhere on the city roads.
With authorities having no alternative in sight, the people are worried as the problem has further aggravated with the resumption of public transport on roads and opening of schools and colleges. There is total mess on the interior city roads but authorities are helpless to solve the problem the main cause of which they attribute to parking of vehicles by people on road side everywhere in Jammu due to lack of parking space.
The worst problem of traffic chaos is faced by people on Canal road up to Jewel, Talab Tillo Bohri road Roopnagar, Janipur -Newplot road, Bantalab road interior city roads from New Plot to Kachi Chawni and Parade. One of the main reasons for the traffic chaos in the city is due to parking of four wheelers and two wheelers on road side by the people visiting markets for purchasing of goods. It has often been observed that people going for marketing park their vehicles in a haphazard manner and even on the centre of road not caring that their such action may result in traffic jam or accident.
With number of malls, showrooms, V Marts etc opening on various markets on road side, the rush of consumers visiting there is also increasing day by day. Due to lack of proper parking space in front of these business houses, the customers park their vehicles on road side which totally hampers smooth movement of traffic on the city roads putting the people as well as commuters to a lot of inconvenience and trouble.
Right from Roop Nagar to New Plot the vehicles are parked on roadside by the customers who visit the adjoining markets for purchasings. Same is case on Talab Tillo Bohri and Canal road up to Jewel where vehicles are being parked on road side by the people in a haphazard manner not caring whether it will hamper the movement of traffic on the road. Even often the traffic jams are seen on these roads in Jammu city which the Government for past some years is claiming that a complete face lift will be given to city by converting it into a Smart City.
The police as well as Traffic Police manning these roads also hardly bother to intervene and act against drivers who park their vehicles on the road side or even centre of the road.
Admitting that there is traffic congestion on Jammu roads due to parking of vehicles on roadside SSP Traffic ,Jammu, Dr Koshal Sharma told Excelsior that the problem has compounded due to lack of parking slots on various city roads due to which people visiting the markets are compelled to park their vehicles on roadside.
He said despite that the Traffic Police is doing its utmost to manage the traffic in the city so that the common people are not put to hardships but at the same time our men become helpless as a customer visiting a market in his four wheeler or two wheeler has to park the same on roadside as there are no parking slots available.
When asked why the Government is not taking steps to construct parking slots on Janipur, New Plot, Roop Nagar as well as Canal Talab Tillo and Bohri road or other city roads, Mayor JMC, Chander Mohan Gupta said that there is no space available for parking slots in these areas. He said till the Civic body gets land for parking slots it can’t do anything in this regard.
The Mayor however, said that some more parking slots are being constructed in Jammu which included one in front of Hari Singh Park near Dogra Chowk. Besides, another parking slot is being constructed in front of KC Theatre and in this regard negotiations are going on with Sericulture Department for land. A park will be constructed at Panjtirthi, Poonch House, another at Shastri Nagar near Cremation Ground and one at Sanjay Nagar by covering a drainage nallah, he added.