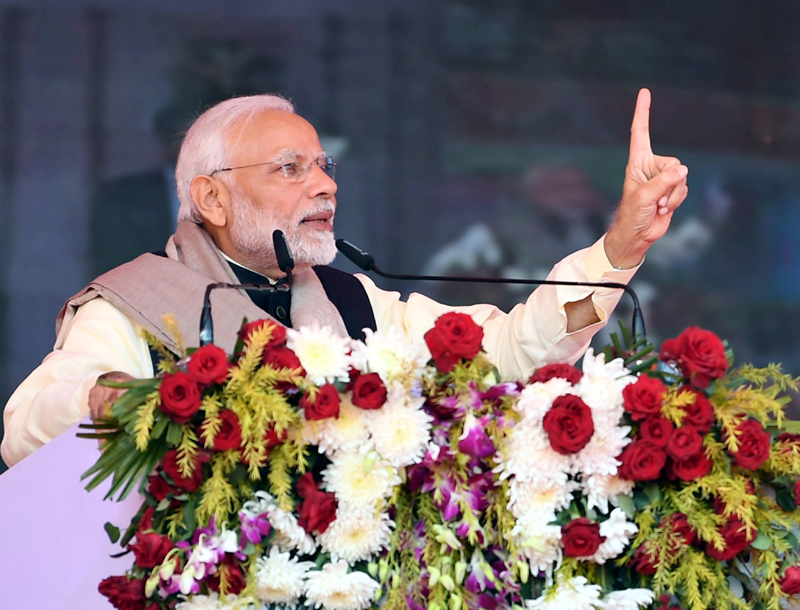 Excelsior Correspondent
JAMMU, Dec 16: Prime Minister Narendra Modi today virtually charged the Congress with compromising national security and said his Government has ordered 1.86 lakh bullet-proof jackets required for the Army, which were sought by the Indian Army in 2009 but then Congress Government from 2009-14 didn’t purchase them.
In a series of tweets on `Vijay Diwas’, the day when Indian Army had won the war against Pakistan in 1971 and made 93,000 Pakistani troopers to surrender, leading to creation of Bangladesh, Modi said the national interests are supreme for the NDA Government whenever it comes to security of the nation, requirements of Army and respect of the troops.
“I want to tell the nation about attitude of the Congress towards security of our Army jawans. The Indian Army had sought 1.86 lakh bullet-proof jacked in 2009, when there was a Congress-led Government at the Centre. Five years were passed and since 2014 (when the Congress rule came to an end), the bullet-proof jackets were not purchased for the troops,” Modi recalled and said after the BJP-led NDA Government came to power, 50,000 bullet-proof jackets were purchased in 2016.
The Prime Minister said he wants to tell the nation that the Central Government has placed the order of all 1.86 lakh bullet-proof jackets in the month of April this year. Significantly, he said, an Indian company is making these bullet-proof jackets.
For us, Modi said, the country is supreme than the party and will always remain so.
“I want to tell the nation that when it comes to security of the country, requirements of the Army and respect of the troops, the NDA Government takes care of only one thing and that is the national interest,” the Prime Minister said.
Without naming Congress, he charged the party with compromising national interests saying they want to abuse Modi and blame him but wanted to know why all this was being done at the interests of the nation.
Recalling that during 1999 Kargil war, the Indian Air Force has stressed the need for modernized fighter jets, Modi said the Congress rule the nation for 10 years after Atal Bihari Vajpayee Government but they didn’t strengthen the IAF.
“Why this was done? Under whose pressure this was done?” he asked.
Paying homage to the martyrs, Modi lauded role of the “brave soldiers”, who displayed indomitable spirit and fought the war in 1971.
“Today on Vijay Diwas, we remember the indomitable spirit of the brave soldiers who fought in 1971,” the Prime Minister tweeted.
He wrote: “Their unwavering courage and patriotism ensured our country is safe. Their service will always inspire every Indian”.
Defence Minister Nirmala Sitharaman also took to twitter and wrote: “The jawans of the Indian Army fought without any regard for their own lives and didn’t stop until they had made the Pakistani forces drop their weapons. Let us honour their martyrdom and courage”.
Meanwhile, Union Home Minister Rajnath, in his `Vijay Diwas’ address, said the internal security scenario has vastly improved during last four years of the Narendra Modi Government and the Border Security Force (BSF) has been given full freedom to retaliate effectively to ceasefire violations from Pakistan in Jammu and Kashmir.
“The internal security scenario has vastly improved during last four years. The Left Wing Extremists affected districts have shrunk from 90 to just about 12 while there has been an 80 percent improvement in insurgency in the North East. The BSF has been given full freedom to retaliate effectively to ceasefire violations from Pakistan,” Rajnath said.
The Union Home Minister said our Armed Forces had proved in 1971 that they have the capability to rewrite history and redraw maps.
“Indian Army has since emerged as a professional model before the world,” he added.
Singh said the ex-servicemen can play a key role in inculcating a sense of national pride among the youths.
Recalling the heroics of Brigadier Mohammad Usman, Maha Vir Chakra awardee and Major Somnath Sharma, India’s first Param Vir Chakra, Singh said some youths today have their idols in cricketers and film stars, but if someone asks them to name Param Vir Chakra recipients, they may not be able to name even one.
The Home Minister said martyrs like Chandrashekhar Azad and Bhagat Singh were all driven by passionate patriotism.
“The society has to stand up with the veterans today and an action plan needs to be framed to preserve individual honour and nation’s integrity among the citizens,” he said.
On the occasion, the Home Minister honoured families of martyrs and released the first quarterly newsletter of Veterans India Association, an NGO.
Singh also declared that he would contribute his one month’s salary to the organization’s corpus for martyrs’ welfare.
Meanwhile, Defence Minister Nirmala Sitharaman, Chief of Naval Staff, Admiral Sunil Lanba, Air Chief Marshal, BS Dhanoa and Vice Chief of Army, Lt General Devraj Anbu paid homage to the martyrs on the occasion of `Vijay Diwas’ in New Delhi.