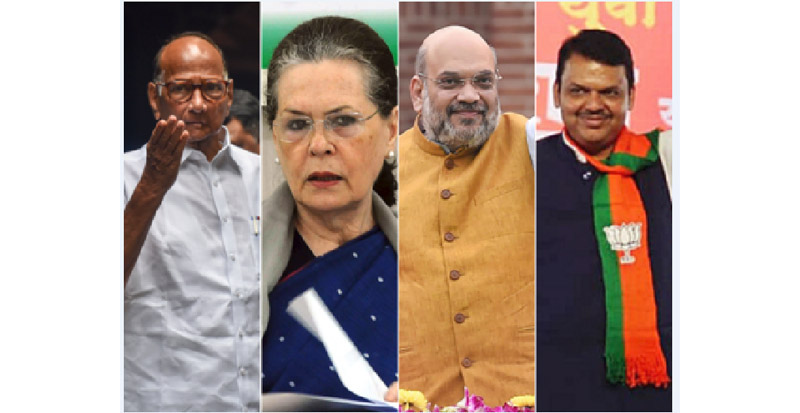 MUMBAI, Nov 4: Maharashtra CM Devendra Fadnavis met Amit Shah, Sharad Pawar met Sonia Gandhi and Sanjay Raut met the Governor today, but there was no clarity yet on the formation of a new Government in the State, 11 days after declaration of the Assembly poll results.
After his meeting with Gandhi in Delhi, NCP chief Pawar ruled out any possibility of his return as State CM.
Asked if the NCP is considering supporting the Shiv Sena, Pawar said, “No one from Shiv Sena has contacted me on this. The mandate for us (NCP) is to sit in the opposition. We do not have enough numbers to be in this race.”
Fadnavis, who met Shah in the national capital to seek Central relief for State farmers hit by unseasonal rains, said the new Government will be formed soon, but did not mention if the Shiv Sena will be a part of the new dispensation.
The Sena is not creating any hurdles in formation of a Government in the State, Raut said after meeting the Governor as the political stalemate saw no sign of resolution.
Whoever enjoys majority should be allowed to form Government, said Raut, who has been vociferously articulating the Sena’s demand for equal distribution of power and sharing the chief minister’s post.
“We informed the Governor that the Shiv Sena is not responsible for the current political situation in the State over formation of new Government,” he said.
Raut, who is also executive editor of Sena mouthpiece ‘Saamana’, said his party is not creating any hurdles in formation of the new Government in Maharashtra, where assembly election results were announced on October 24.
“The Governor informed us that there is some time for government formation in Maharashtra. He said any political party (which commands majority) can come forward and stake claim (to form Government),” Raut said.
“We agree that the Governor is functioning within the framework of the Constitution,” said the Rajya Sabha member.
The meeting came at a time when the BJP and the Shiv Sena are engaged in a bitter tug-of-war over the latter’s demand for equal distribution of portfolios and sharing the Chief Minister’s post. The BJP has rejected the Sena’s demand for sharing the Chief Minister’s post for 2.5 years each.
In the October 21 polls to the 288-member Assembly, the BJP won 105 seats followed by the Shiv Sena 56, the NCP 54 and the Congress 44.
A Marathi daily, widely seen inclined towards the RSS, today likened to ‘Betaal’, the mythological ghost known for challenging King Vikramaditya with his witty riddles.
Coming down heavily on Raut, Tarun Bharat, the Nagpur-based publication believed to be close to the Sangh and its political extension BJP, said he was hurting the chances of BJP-Sena alliance to come to power in Maharashtra.
“Late Balasaheb Thackeray spent his entire life for wresting power from Congress and NCP. But this ‘Betaal’ is trying hard to shatter his dreams,” the editorial said.
Meanwhile, the Sena said the intricacies of government formation in Maharashtra should not push rain-hit farmers towards existential crisis and demanded that they be provided relief package of about Rs 30,000 crore.
Farmers in the state need to be saved at any cost, it said in an editorial in party mouthpiece ‘Saamana’, while terming as inadequate the Rs 10,000 crore aid announced by the state government for crop damage due to unseasonal rains.
Raut on Monday tweeted a photo of him with party chief Uddhav Thackeray along with a message, saying “journey is enjoyable before reaching the goal”.
The Rajya Sabha member, whose party espouses the cause of ‘Marathi Manoos’, posted the message in Hindi on his twitter handle. The post reads: “Lakshya tak pahunchne se pahle safar me mazaa aataa hai.”
Raut in the post also greeted his followers with the slogan “Jai Hind”, even as the party has since long been insisting on using the salutation- “Jai Maharashtra”.
A BJP Minister in the State said some of his party leaders are willing for a re-election in the state. The BJP leaders expressed this view during a review meeting held in Dhule district on Sunday, Jaykumar Rawal said.
Independent MLA Ravi Rana, who has extended support to the BJP in Maharashtra, claimed that “some 25 MLAs” of the Shiv Sena were in touch with him over formation of the next Government.
He dubbed the Sena as “very arrogant” and claimed the Uddhav Thackeray-led party will split and nearly two dozen MLAs will join the BJP if Fadnavis forms the next government without its saffron ally.
Rana, along with his wife and Lok Sabha member Navneet Kaur Rana met Koshyari here. “There are 25 MLAs of the Shiv Sena who are in touch with me for government formation. If Fadnavis forms a government without the Shiv Sena, in the next two months there will be a split in the Sena and 25 MLAs would join the party,” he said. (PTI)