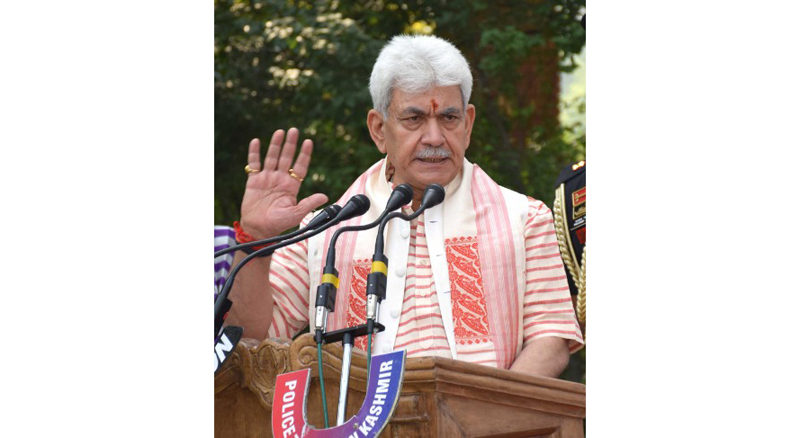 ‘KPs will get back their property, locals too want them to return’

*Milestones, roads to be named after martyrs from Sept 30

JAMMU, Sept 19: Lieutenant Governor Manoj Sinha said today that there was a time when there was “buy peace formula” but now the time has changed and so is the Government policy with major aim being to maintain and establish peace in Kashmir and declared that Kashmiri Pandits, who were driven away from Kashmir by Pakistan-sponsored terrorism in 1989-90 leaving behind their homes and hearths, will get back their property within a time limit. He said the common man in Kashmir also wants the migrants back.

Click here to watch video
Without naming the previous regimes in Jammu and Kashmir, Sinha said there was a time when attempt was made to buy peace but with change in the situation there has been a shift in the policy as well.
“That time is now gone. Now the administration is trying to maintain and establish peace in Kashmir. This is the major shift in the policy along with change in the situation in Kashmir,” he said while speaking at an event `Pedal for Peace’ organized by Jammu and Kashmir Police in Srinagar.
Sinha declared that all those involved in anti-national activities or trying to create hurdles in peace will be strictly dealt with.
“No one will be allowed to harm unity and sovereignty of the country. We won’t hesitate in dealing sternly with those involved in anti-national activities and the elements creating hurdles in the path of peace in Jammu and Kashmir,” he asserted.
He said that the Government wants peace and brotherhood to be maintained in the UT.
Lauding the Jammu and Kashmir Police for its sacrifices, Sinha said important milestones, institutions or roads in the UT will be named after those personnel of police or other forces who have laid down their lives for the nation.
“The Committee concerned has made a decision and the process will start from September 30. There cannot be a much better way to honour the sacrifices of the martyrs who gave their blood for saving Jammu and Kashmir and the nation,” Sinha said, adding that many people have sacrificed their lives and “I assure that the Government will take care of the health, education and basic facilities of their families and children”.
At his monthly ‘Awaam Ki Awaaz Address’, Sinha said the Kashmiri Pandits, who migrated to different parts of the country after outbreak of militancy, supported by neighbouring country, in late 1989 and 1990, are being encouraged to return and a number of measures have already been announced for the purpose.
” To restore the rich cultural fabric of the society, the Government has taken a path-breaking decision to undo the injustice of decades and restore the former glory of the land that was always the repository of brotherhood,” he said.
He added that 44,000 Kashmiri Pandit families are registered with Relief Commissioner. These families have left their land and other property when they were forced to leave the Valley, he said adding they will be given justice.
“We have already announced that who sold their property under distress can register themselves on the recently opened website for this purpose,” Sinha said, adding the Government will help them to get their property within a timeframe and resettle them with the neighbours again. The Kashmir culture is incomplete without Kashmiri Pandits, he said adding people in Kashmir also wanted them back.
At the Jammu and Kashmir Police function, Sinha lauded Jammu and Kashmir Police saying it worked hard for safeguarding peace and sovereignty of the country and has performed its duty towards nation along with other colleagues from Jammu and Kashmir despite tough circumstances.
“I thank you for your sacrifices and for being alert to maintain the internal security. It is commendable the way J-K Police is working with restraint and courage, and with love towards the motherland. It is not an easy job to maintain law and order, fight terrorism and also work for the interests of the people,” the Lieutenant Governor said.
Saying that Jammu and Kashmir Police is also fighting drug abuse, he said it is trying to bring those youth, who abuse drugs, into the mainstream.
“I appeal to the youth to desist from it and channelize their energy into something good for themselves, their families, society and J-K,” he added.
Referring to the spike in COVID-19 cases in Srinagar, Sinha appealed to the people to follow guidelines and get vaccinated.
“Today, we see 50 per cent of the total COVID-19 positive cases are coming from Srinagar. I request the people of Srinagar to follow Standard Operating Procedures (SOPs) in spirit, otherwise we will go back to where we were last year,” he added.
Sinha said sporting events have the power to effect a change much more than any other event and compared to other states, J-K is spending more on sports.
“We are spending double the amount that is being spent on sports in the country’s largest State of Uttar Pradesh. Our budget, for 1.25 crore population, on sports and education is only Rs 75 crore less than Maharashtra whose population is 12 crore.
“So, we are spending more on sports and education than other States. Our sports infrastructure is behind none. We have a stadium and an indoor stadium in every district and for that I am thankful to Prime Minister Narendra Modi,” he said.