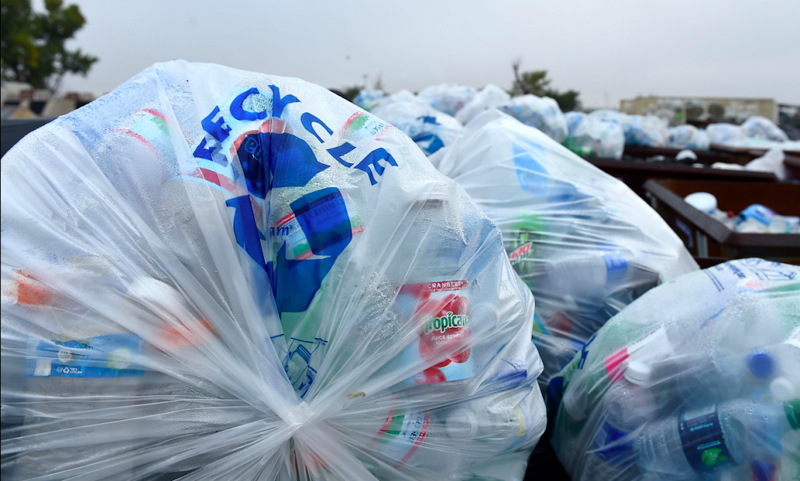 JAMMU, June 29: Even after admitting that major part of generated plastic waste remains unattended and leading to severe environmental and health hazards, the Government of Union Territory of Jammu and Kashmir has failed to ensure action on the Action Plan from majority of the Urban Local Bodies (ULBs) despite lapse of considerable period of time.
Official sources told EXCELSIOR that the disposal of plastic is one of the least recognized and mostly highly problematic areas of ecological impact and a very small amount of total plastic production is effectively recycled and the remaining plastic is sent to landfills where it remains entombed for years together where toxic compounds are spewed throughout the atmosphere to be accumulated in biotic forms throughout the surrounding ecosystems.
The amount and contents of generated plastic waste may differ among different cities and towns of Jammu and Kashmir but problems related to collection, transport and disposal are the same and major part of the generated plastic waste remains unattended thus leading to environmental and health hazards.
Keeping all these aspects in mind, the Government vide Order No.13-JK(HUD) of 2019 dated November 20, 2019 issued by Principal Secretary to Government Housing and Urban Development Department Dheeraj Gupta notified Action Plan on Plastic Waste Management for strict implementation by Jammu and Srinagar Municipal Corporations, 36 Urban Local Bodies of Jammu and 40 of the Kashmir province.
In the Action Plan, timelines were fixed for Urban Local Bodies for action on nine key points. However, thereafter no efforts were made by the Housing and Urban Development Department to ascertain action on the Action Plan as a result of which no discernible progress has been made by majority of the Urban Local Bodies till date, sources disclosed.
For framing of bye-laws by all the Urban Local Bodies there was timeline of January 2020 but action by majority of the Municipal Councils and Committees is still awaited, sources said, adding “similar is the fate of enforcing waste generators to practice segregation of bio-degradable, recyclable and domestic hazardous waste the deadline for which was December 2019”.
Likewise, no visible progress has been made on door-to-door collection of plastic waste by all Urban Local Bodies although deadline expired on December 31, 2019. Moreover, no serious attention has so far been paid towards setting up of Material Recovery Facilities by all the Urban Local Bodies, which was also to be completed by December 2019.
“In the absence of Material Recovery Facility, there is no progress on segregation of recyclable and non-recyclable plastic waste”, sources said, adding “even no serious step has been initiated till date for channelization of non-recyclable plastic waste for use either in cement kilns and in road construction”.
What to talk of all these steps, the Urban Local Bodies in both the divisions of the Jammu and Kashmir Union Territory have not been conducting surprise checking of littering, open burning of plastic waste or any other acts of public nuisance. “In the absence of action on main points there is no headway on the decision about channelization of recyclable plastic waste to registered recyclers”, sources further said.
“It seems that Action Plan on Plastic Waste Management was prepared just as a formality in view of directions of the National Green Tribunal otherwise follow-up action should have been ensured and monitored by the Housing and Urban Development Department”, they said, adding “because of inaction on key points, the plastic waste is being carried with the municipal solid waste and then disposed of in the landfill sites”.
The unplanned handling of plastic waste is resulting into choking of drainage system, reduces rate of rain water percolation resulting in lowering of water table levels, deteriorates soil fertility and burning of such waste as is being noticed in many areas leads to highly toxic gases like phosgene, carbon monoxide, chlorine, sulphur dioxide, nitrogen oxide besides deadly dioxins.
When contacted, heads of several Municipal Committees and Councils in both the divisions of J&K UT, while admitting inaction on the Action Plan, attributed the same to lack of funds and resources at their disposal. “Unless sufficient funds for this task are given to us it is difficult to act on the instructions issued by the Government”, they added.