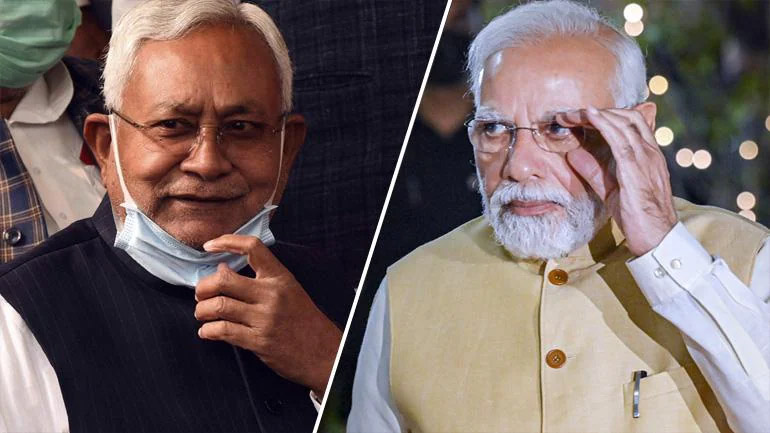 PATNA, Aug 9: Amid a political storm brewing in Bihar, in a meeting convened by Bihar Chief Minister Nitish Kumar on August 9 morning to discuss the situation in his party, he formally announced that the alliance between JD(U) and BJP has broken off. Mr. Kumar is also set to meet Governor Phagu Chauhan at 4 p.m. today.
Mr. Kumar cited several conspiratorial steps by BJP to dethrone his government from power as the reason for taking the extreme step.
He is likely to meet the Governor with all 161 legislators from the Grand Alliance (Mahagathbandhan) also comprising RJD and Congress.
Both the ruling JD(U), BJP and the Opposition RJD held separate meetings of their legislators in Patna on August 9.
Mr. Kumar had convened the meeting following the exit of former national president RCP Singh. Mr. Singh resigned after the JD(U) sent a notice seeking explanation on the charges of corruption levelled against him.
Meanwhile, leader of the opposition Tejashwi Yadav is likely to visit the CM Kumar’s residence to hand over the letter of support any time.
Bihar Congress president Madan Mohan Jha said his party MLAs will “support the anti-BJP government in the State.” The Congress has 19 MLAs in the State Legislative Assembly.
According to sources, Mr. Kumar is said to have spoken to Congress president Sonia Gandhi on August 8 evening, but there was no official word on this from the Congress.
CPI(ML) general secretary Dipankar Bhattacharya had said his party, with 12 MLAs in the Bihar Assembly, was ready to support the JD(U) if it left the BJP.
The reason for Mr. Singh’s exit from the Cabinet and later from the JD(U) is seen as his growing proximity to the BJP, at the cost of the JD(U), because of which he was denied a renomination to the Rajya Sabha which made his continuation in the Union Council of Ministers untenable.
This incident and a few others before it have led to a growing distrust between the BJP and the JD(U).
The BJP, meanwhile, has gone into a huddle at the residence of Deputy CM Tarkishore Prasad, where all ministers belonging to the party besides state president Sanjay Jaiswal and other senior leaders are also present.
In the state assembly, which has an effective strength of 242, requiring 121 MLAs for a majority, the RJD has the highest number of 79 MLAs followed by the BJP (77) and the JD(U) with 44.
The JD(U) also enjoys the support of four MLAs of former Chief Minister Jitan Ram Manjhi’s Hindustani Awam Morcha and an Independent.
The Congress has 19 MLAs while the CPIML(L) has 12 and CPI and CPI(M) have two each.
Besides, one MLA belongs to Asaduddin Owaisi’s AIMIM. (Agencies)