LONDON, Dec 15:  Singer-actress Nicole Scherzinger says she almost said no to the TV remake of “Dirty Dancing” because she did not want to promote abortion.
The 38-year-old beauty plays the part of Penny in the upcoming ABC special, which is based on the iconic musical romance movie, but considered walking away from the project as her father opposes abortion, reported Female First.
“My Papa’s a bishop and my family’s really hard core against abortion. I almost didn’t take it because I didn’t want to promote abortion,” Scherzinger said.
The singer is still keen to discourage her fans from following in the footsteps of her on-screen character.
“Hopefully they can learn from her ways and I can be a positive influence. My mum got pregnant with me when she was 17 and had me when she was 18. She chose.
“Her parents were never going to let her have an abortion.
So I came out. So I just want to encourage everybody to keep your babies,” she said. (PTI) 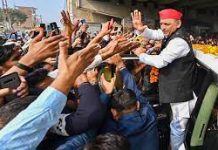 People being prevented from casting vote in Mainpuri, Rampur by-elections in UP: Akhilesh