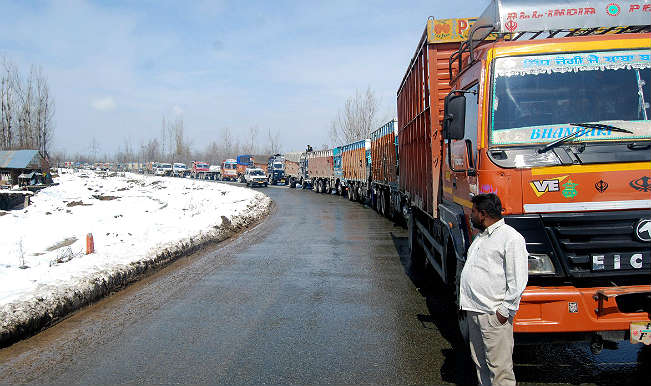 Excelsior Correspondent
SRINAGAR/ JAMMU, Jan 16: The Srinagar-Jammu National Highway was restored this evening for vehicular traffic while Air traffic was partially restored at Srinagar Airport this afternoon whereas, due to dense fog the flight operations were badly hit at Jammu today.
SSP Traffic, National Highway, JS Johar said that highway was restored at around 5 pm today and the movement of stranded vehicles towards Kashmir was allowed. He said about 50 Light Motor Vehicles stranded in Banihal area were allowed first to move towards Kashmnir followed by other vehicles. The stranded heavy vehicles were also allowed. Thereafter, the movement of stranded vehicles towards Jammu was allowed. He said about 100 tankers loaded with fuel/ LPG etc and stopped in Ramban and Batote areas, will also be allowed towards Kashmir tomorrow.
Johar said since the highway has been cleared for only one way traffic no fresh movement of vehicles from Srinagar or Jammu side will be allowed tomorrow. He, however, said that only stranded vehicles on north side of the Jawahar Tunnel will be allowed to move towards Jammu tomorrow.
Another official said that the Border Roads Organization (BRO) cleared the snow from the highway this evening. Around 100 vehicles that were stuck in snow between Zig and Jawahar Tunnel since Monday were allowed to cross the Tunnel this evening. However, no fresh traffic was allowed on the Highway. They said that around 6000 trucks were stranded in Qazigund area for last few days. They will be cleared towards Jammu.
Meanwhile, air traffic partially resumed at Srinagar Airport this afternoon after all the fights were cancelled yesterday. An official said that 9 flights landed at Srinagar Airport today while 16 were cancelled.
At Jammu Airport, due to fog and bad weather conditions in the region, five flights including three Spicejet, one Go Air and one Vistara were cancelled while eight flights were delayed. The morning Mumbai-Jammu Spicejet flight was delayed by more than three hours due to dense fog at the airport.
A BRO official said that the runway of the Srinagar International Airport was made operational by this afternoon. BRO which maintains Srinagar Airport said that the runway has been made operational after snow clearance by the team. “Team of 32 BRTF of Project Beacon worked round the clock to make the airport operational at the earliest,” Col Mukesh Kumar, Commander 32 BRTF said.
The BRO official said that it deployed high-tech machines to clear the snow immeditaley after the snowfall stopped this morning.
The snowfall continued till this morning and few inches of snow had accumulated on the roads but in South Kashmir 3 feet, in Anantnag 8 inches, in Kulgam and Pulwama one feet and at Jawahar Tunnel over one feet of fresh snowfall was recorded overnight.
Director Meterological Department, Sonam Lotus told Excelsior that there is no major weather activity in Jammu and Kashmir till January 20. He said that overcast conditions will prevail in Jammu and Kashmir for next four days with isolated rain or snowfall in upper reaches of Kashmir and Jammu divisions.
In Srinagar, authorities cleared snow from the major roads but interior roads are covered with snow for last few days. The commuters are facing difficulty in commuting on these inner link roads.
Meanwhile, many parts of Doda, Bhaderwah, Poonch and Ramban experienced light snowfall since last night while Basohli-Bani road was again blocked due to landslides.
Remote Paddar area of Kishtwar was without power supply for the last four days while water supply was restored there after three days this evening. The road which was lying blocked for the last four days was restored this afternoon. The power supply in many areas of Poonch, Rajouri, Latti- Dudu, Basantgarh Landhar and Ramnagar areas could not be restored even today. With the partial sunny day today at Jammu, there has been some improvement in the temperature today.