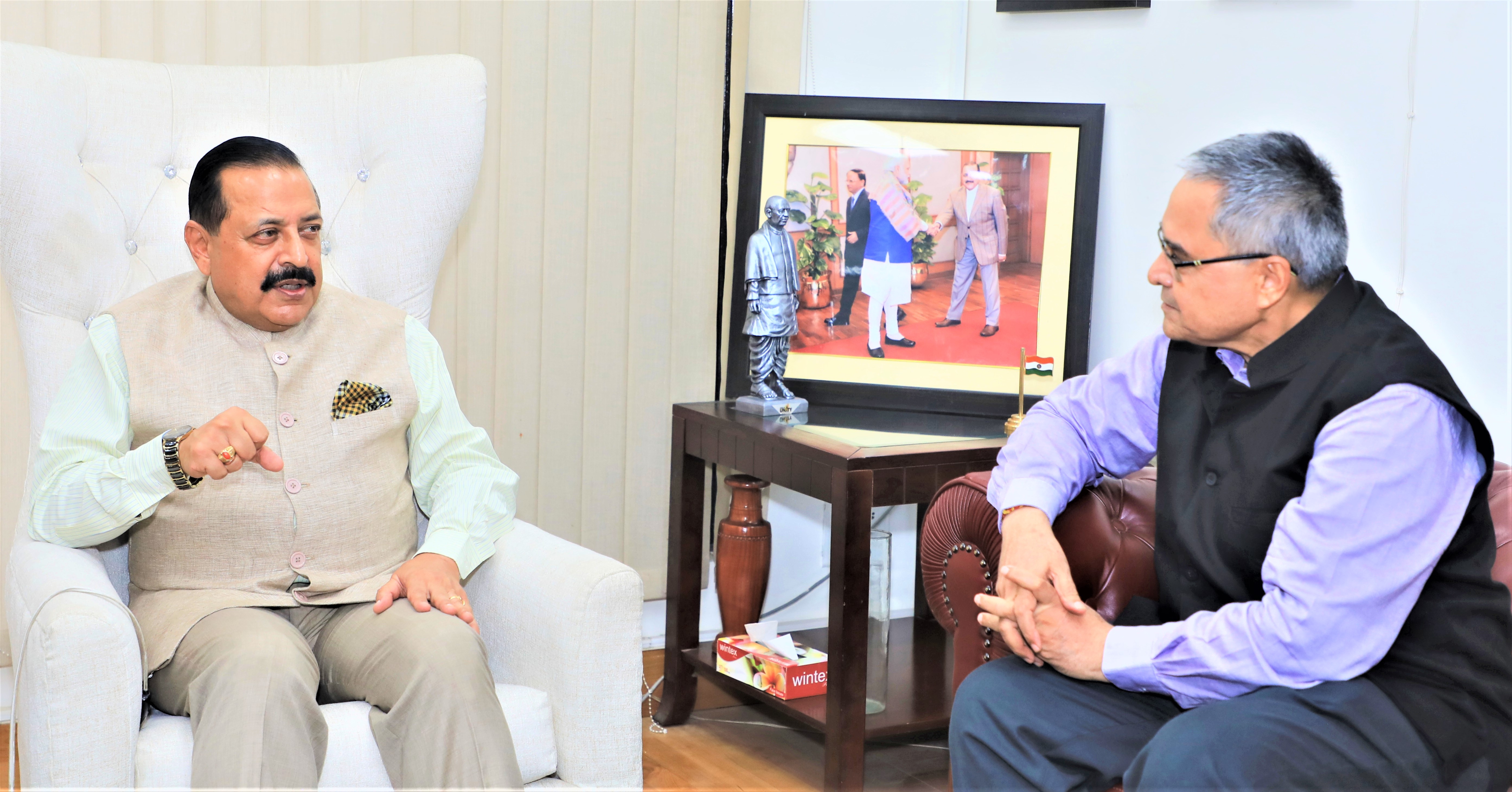 NEW DELHI, August 11 : Newly appointed Central Vigilance Commissioner (CVC) of India, Suresh N. Patel called on Union Minister of State (Independent Charge) Science & Technology; Minister of State (Independent Charge) Earth Sciences; MoS PMO, Personnel, Public Grievances, Pensions, Atomic Energy and Space, Dr Jitendra Singh, who is also Incharge DoPT nodal department for CVC, and briefed him about constantly declining case pendency in recent years.
The CVC was later also joined by the two Vigilance Commissioners, Arvind Kumar and Praveen Kumar Srivastava, who submitted detailed data substantiating timely disposal of disciplinary actions against employees of the Central Government.
Citing figures, CVC Patel informed Dr Jitendra Singh that the pendency of 2,099 disciplinary matters for the period prior to December 2018 had been reduced to 227 by 30.6.2022 due to a special campaign initiated by the Commission in 2020. Similarly, overall outstanding disciplinary matters which on an average as on December 2019 used to be around 5,000 at a given point of time has come down drastically in the range of 1,700 now due to cooperation of the authorities at different levels.
Dr Jitendra Singh said, by appointing CVC and two Vigilance Commissioners as mandated under law in the first week of this month itself, Prime Minister Narendra Modi has sent out a message of policy of zero tolerance for corruption. He also quoted Modi’s address at the CVC conference at Kevadia in Gujarat in October, 2021, wherein he said, “In the last 6-7 years, the government has succeeded in instilling the confidence that it is possible to contain corruption, “Today there is the political will to attack corruption and continuous improvement is also being carried out at the administrative level.”
The Commission said, it started the exercise in 2020 to review pending cases of Disciplinary Matters so as to ensure that all cases reach a logical end within a reasonable period of time. The exercise was taken up in a campaign mode so that those found guilty are punished without delay so as to prevent them from further wrongdoing and those found innocent are exonerated to avoid unnecessary stress to them. With support of all Disciplinary Authorities, Inquiring / Presenting Authorities, Chief Vigilance officers and staff of Commission the old cases were taken up for disposal.
Patel pointed out that this has happened in spite of the prevalence of pandemic during the time period of the campaign. Even for the remaining cases timelines have been set for each and every individual case through continuous monitoring with CVOs.
Dr Jitendra Singh lauded the special efforts of the Commission and said that this has brought positivity amongst the Government employees which shall encourage them to take decisions in the interest of the organisation while following procedures without any fear of unwarranted disciplinary action. Also, the timely disciplinary action would work as a deterrent for those whose intentions / actions may not be in the interest of the Organisation and deserve to be punished, the Minister pointed out
The Central Vigilance Commission deals with the complaints against employees of Central Government and Central Government controlled organisations including PSBs, PSUs and UTs. Arising out of investigations carried out through Chief Vigilance Officers (CVOs) in various organisations, wherever lapses of vigilance nature are noticed, the Commission advises initiation of Disciplinary action.