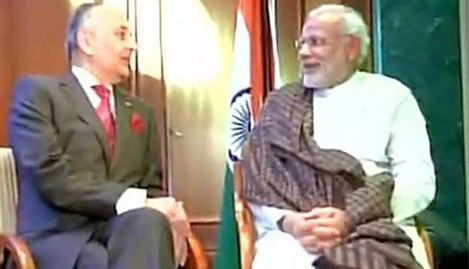 BERLIN, Apr 14:  Netaji Subhas Chandra Bose’s grand nephew met Prime Minister Narendra Modi here and sought declassification of all secret files related to the freedom fighter, amid a row over reported snooping on the leader’s close relatives.
Surya Kumar Bose met Modi after attending a reception hosted in the Prime Minister’s honour by India’s Ambassador to Germany Vijay Gokhale here last night.
Surya later said he had urged the Prime Minister that the papers should be declassified immediately as he was shocked at the recent reports that the government of Jawaharlal Nehru had “spied” upon Netaji’s family.
Asked about Modi’s response, he said the Prime Minister said he would look into the matter right away as he too felt that the “truth should come out”.
Surya attacked the Nehru government, saying it was “shocking” that a government of independent India had spied upon Netaji’s family.
“The government should get the truth out,” he said.
Surya said there should an investigative commission to go into the matter to bring out the truth.
“The government also should stop spreading lies that only non-violence had led to the Independence as it could not be won without the contribution of Subhas Bose,” Surya said.
Asked about the earlier Commissions of inquiry, he said, “the first two were totally bogus.”
He said the Mukherjee Commission had done more but it did not have investigative powers.
Surya had on Sunday said, “Subhas Bose did not belong just to his direct family. He had himself said that the whole country is his family. I do not think it’s just the duty of the family to raise this issue (of declassification of Netaji files).”
Surya, the president of the Indo-German Association in Hamburg, was invited by the Indian Embassy to attend the reception for Modi.
In an RTI reply, the Prime Minister’s Office has refused to declassify secret files relating to Netaji arguing that the “disclosure would prejudicially affect relations with foreign countries”. (AGENCIES)