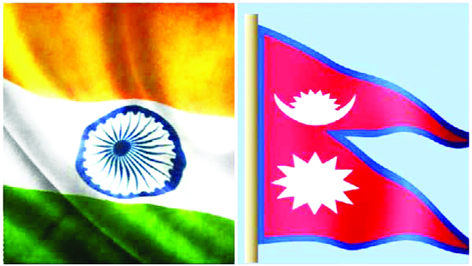 Barun Dasgupta
India-Nepal relations soured recently after the Nepal Government claimed three Indian territories to be their own – Kalapani, Lipulekh and Limpiyadhura in Uttarakhand. The total area is 335 sq. kms. The Nepali side not only claimed these Indian territories but published a new map showing these areas to be in Nepal. The map was later presented to and approved by the Nepali Parliament. Nepal quoted the Treaty of Sugauli, signed in 1816 in support of its claims. The Treaty of Sugauli was between the East India Company and Rajguru Gajaraj Mishra with Chandra Shekhar Upadhyaya for Nepal after the Anglo-Nepalese war (November 1814 to March 1816).
When Nepal’s claim was first reported in the Indian media, many wondered why Nepal should suddenly rake up a dispute with India by claiming Indian territory quoting a treaty which is more than two hundred years old. The hot haste with which a new map was drawn and ratified by the Nepali Parliament led many, including the Indian Army chief M. M. Naravane, to wonder whether Nepal was doing this at the behest of China (Naravane just stopped short of naming China). The fact that Nepal made the territorial claim when China was making fresh incursions into East Ladakh and occupying Indian territory gave rise to the suspicion that it was not a fortuitous coincidence but the two developments were inter-connected. China seemed to be provoking Nepal to pick a quarrel with India.
Surprisingly, a few days later came the news that China had occupied a village named Rui in northern Nepal by removing border pillars and Nepal was unhappy about it. The village is in Gorkha district and now in complete Chinese control. China has allegedly occupied 36 hectares of land at eleven strategic places in four districts of Nepal. It is generally believed that the 80-km long new road that India has built connecting Lipulekh Pass with Dharchula in Uttarakhand has irked China. The Chinese incursions in Ladakh, however, have a different objective.
Nepal and China do not have a border dispute because the border is the Himalayas. But five years ago, the Nepali Parliament took exception to the agreement between India and China to carry on trade through Lipulekh. Nepal took the stand that the Sino-Indian agreement violated Nepal’s sovereign rights over Lipulekh.
Internally also, Nepal is in turmoil. The rift between Prime Minister K. P. Sharma Oli and former Prime Minister Pushpa Kumar Dahal, better known as Prachanda, is out in the open. Both belong to the Nepal Communist Party. Things have come to such a pass that Oli has recently made a cryptic remark that a “conspiracy” was being hatched with his political rivals to oust him from power. He did not elaborate who was conspiring with whom but many thought he was alluding to India and Prachanda.
Oli and Prachanda had never had a smooth relationship. Prachanda originally belonged to the Communist Party of Nepal (Maoist), while Oli to the Communist Party of Nepal (United Marxist-Leninist). The two parties merged to form the Nepal Communist Party (NCP) but incompatibilities between leaders remained. The latest difference between the two is about letting the Millennium Challenge Corporation work in Nepal. The MCC is an independent US foreign aid agency. In Nepal it wants to develop hydro-electricity.
But the project offered by it has been strongly opposed by a section within the NCP, led by Prachanda. The factional war within the NCP over the Millennium project has become so bitter that a stormy Central Committee meeting of the party ended half way, without taking any decision. The demand for Oli’s resignation has been raised by this faction. The Oli Government’s handling of the corona pandemic has also come in for severe criticism.
There is a strong anti-India feeling in Nepal. There are many reasons for this feeling. While the Communists were waging an armed struggle to end the monarchy and usher in democracy, India consistently sided with the monarchy. The Indian rulers’ fear was that if the communists succeeded in winning power, it will align with China. The victory of the anti-monarchy forces could not be prevented but in the bargain India earned a bad reputation. Again, when the constitution of Nepal was being framed, India wanted Nepal to remain as Hindu Rashtra. But Nepal chose to be a secular State.
The 2015 Nepal blockade (when Indian trucks carrying commodities for Nepal were held up at the border) proved to be the last straw on the camel’s back. Nepal moved very close to China and signed a treaty with China for a railway link with Lhasa so that it has an alternative route. The memory of the blockade which brought Nepal on the verge of an economic collapse, has not been forgotten by the Nepali people.
Historically, geographically and culturally Nepal has greater affinity with India than with China. Beijing is trying to use Nepal against India and bring it under Chinese influence. Ultimately, the Nepal-China bonhomie will be disastrous for Nepal. India has to make amends for past mistakes and win back Nepal’s friendship and trust. Treating Nepal with the respect due to it as a sovereign independent country and not to be overbearing with it will help normalize relations with India. Nepal has to be persuaded made to realize that India is its real friend and that making territorial claims on India is to play in the hands of China. In the long run, it will harm rather than help Nepal. (IPA)