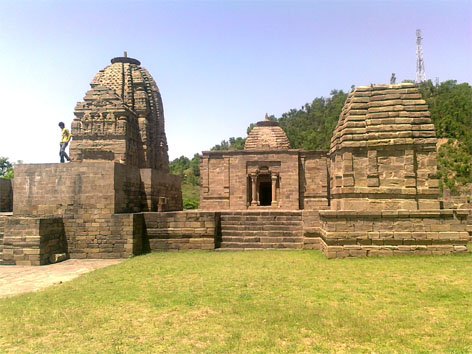 While commenting upon various aspects of tourism in Jammu and Kashmir , we keep on highlighting the vast untapped rich potential of tourism and related activities in Jammu region. It suffers in areas of extensive surveys , it lacks vital connectivity , it has very little or no plans of sustenance and improvement , it remains grossly unreported and not highlighted, with which could be paired, no publicity and last but not the least, the apathy and deficit of keen interest by the Tourism Department and its top hierarchy. One such glaring instance could be found in deserted and decayed seven ancient temples which are popularly known as Pandavas Temples in Krimchi , Udhampur district which is not that far from Jammu Srinagar National Highway . As the very name suggests, its close connect with the late Pandva dynasty that ruled Jammu and Kashmir and overtly or covertly related to Mahabharta War is of importance to be fairly known. Since the Krimchi temples are falling under the overall care of Archaeological Survey of India, they should have been looked after in a better way resulting in fetching a running revenue too but with an initial investment in facilities for tourists.
Needless to add, need has arisen to revisit the style and the mode of writing history of India particularly in respect of Jammu and Kashmir which after the departure of the British, should have been more vivid , related more to the ancient glory , rich culture and traditions with special emphasis on the superb architecture and workmanship dexterity, building feats and techniques of Indian builders , designers, architects, sculptors and engineers. Kedarnath Temple originally built by Pandavas , Badrinath temple of Vedic period, Khajuraho temples, Architectural marvel of Thanjevur, Dilwara temple of Mount Abu considered far better than the Taj in its grandeur exuding superb marble work and even in Kashmir , world famous Martand Temple (in ruins) are a few among numerous ones depicting our rich legacy of building engineering feats , arts and crafts. Pandavas Temples in Jammu are superbly built and among the most tastefully spots situated in picturesque landscape , a feast to the beholders of nature lovers but unfortunately, neglected by the successive Governments. Road connectivity in tatters is the biggest hump in this destination of tourists becoming somehow known to most of the tourists coming to Jammu and Kashmir.
The irony is that our younger generation, the school and college going young students, are kept bereft of rich historical and cultural legacy that Jammu region is bestowed upon . That has a long term impact of the later cultures and events of history and culture dating back to a few hundred years only gaining deep rooted acceptability and legitimacy. ‘Excelsior’, intermittently but regularly keeps highlighting this aspect of forgotten symbols of rich legacy and the need to make them fairly known, researched and written about but that all needs the initiative from the Government and admittedly from some active NGOs too. Locals are sore and frustrated over the degree of neglect this beautiful tourist spot having been subjected to that many preferred the place to be rechristened as “neglected destination”. Who cares, they observed, about the historical importance of these ancient temples? Some work in respect of making pucca road was started but at a snail’s speed with the result that even if some interested willing tourist, per chance, happens to visit these temples and the beautiful enchanting surrounding area , vows never ever to revisit due to the difficulties encountered reaching this destination.
Pancheri, a beautiful hilltop could be converted into an attractive tourist spot but continues to be unexplored. Does cheap politics gain ascendancy over pure tourism related considerations like doubts, were expressed by some of the residents of the area . Even the basic amenities and facilities for the tourists are nowhere to be seen . Funds should be used to better the overall condition, connectivity and associated facilities in and around Krimchi temples. The UT Government is urged to look into the issue on urgent and preferred basis which we shall keep on monitoring on regular basis.