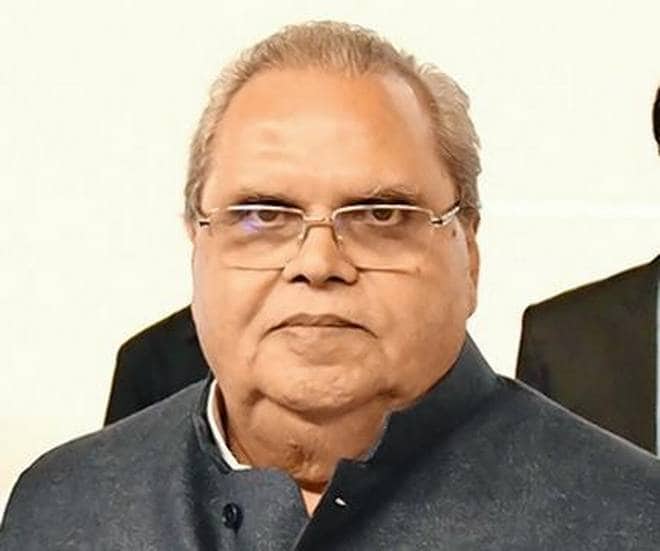 ‘Employees are paid, they should attend R-Day’
Order being issued since 2009

JAMMU, Jan 21: Governor Satya Pal Malik today took a strong dig at some political parties and other organizations for politicizing the Government order asking the officials/officers to attend Republic Day celebrations saying such type of “negative politics” has destroyed Kashmir even as he maintained that there was nothing new in the order and such orders were being issued continuously since 2009.
“Some political parties introduce communalism, nationalism and anti-nationalism in everything. They see politics in every order. This kind of politics for the sake of vote bank has divided the society. Such politics has destroyed Kashmir,” Malik told few media persons following controversy generated by some political parties and organizations especially the People’s Democratic Party (PDP) over the Government order asking officers/officials to attend the Republic Day functions.
Asserting that some political parties have become defunct and were losing face, the Governor lamented that they give political color to everything for vote bank politics with a view to divide society for votes.
“I stand by the order. There is nothing new in it. Every year, such an order is issued to all Government employees. I have copies of these orders with me since 2009 to 2018. They (the political parties crying foul over the order) have themselves issued them,” he said, adding the present Government order was the same like the ones issued from 2009 to 2018 without even a change of coma or full stop.
It may be mentioned that National Conference and PDP were in the power from 2009 to 2018 and the Governor clearly mentioned that during their tenures too, such orders have been issued.
While National Conference hasn’t objected to the order, some leaders of the People’s Democratic Party (PDP) had stated that the Government was trying to force nationalism on the people of Kashmir.
“As a Government officer/official, you get salary to perform your duties. There is nothing like imposing nationalism on the people. The Government officers have to do their duty,” the Governor said and took serious exception to unnecessary opposition and controversy generated over the order by some quarters though such an order was being issued for past one decade.
“It is duty of Government employees and they must remain present at Republic Day function. How it comes to ‘imposing’ nationalism by issuing this order,” said the Governor.
“I do not understand how nationalism is being “imposed” by issuing order to the employees,” he said and added “the political parties are actually creating problem by unnecessarily making an issue in the name of nationalism and communalism.”
“This is not good,” said the Governor.