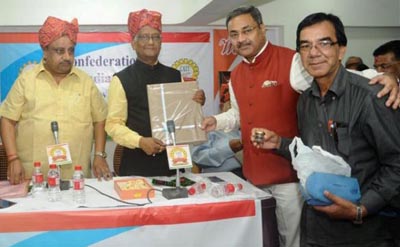 JAMMU, Aug 21: President Chamber of Traders Federation, Jammu, Neeraj Anand has been elected as vice president of  Confederation of All India Traders (CAIT).
The elections of the national body of the traders were held recently at Nagpur. While Mr Anand from Jammu was elected as  vice president, Nazim Wadera from Kashmir as CAIT secretary. BC Bhartiya and Parveen Khandelwal have been re-elected as president and general secretary, respectively.
Induction of Neeraj Anand in the national body has been the matter of pride for the traders of Jammu region. They hope that voice of J&K business community is expected to gain strength at National level with the induction of two members from J&K in CAIT.