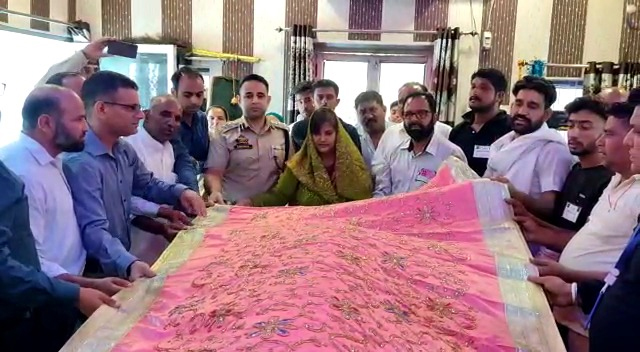 Jammu, Jun 23: The annual fair at the Baba Chamliyal shrine along the International Border in Samba district of Jammu and Kashmir saw a huge rush of devotees on Thursday as it was being held after a gap of two years due to Covid, officials said.
According to a police official, nearly 25,000 devotees from different parts of Jammu and Kashmir and neighbouring states have visited the shrine till 2 pm.
The shrine of Baba Dalip Singh Manhas, known as the symbol of the Indo-Pakistan bonhomie in the past, did not see any visitors from the neighbouring country for the fifth straight year even as the ceasefire agreement was renewed in February last year.
Officials said there was no traditional exchange of ‘Chadar’ and ‘Shakkar/Sharbat’, believed to have powers to heal various skin diseases, between the two sides at the shrine.
“The fair is being held with traditional fervour and enthusiasm… after a gap of two years,” the BSF’s Deputy Inspector General Surjit Singh Sekhon told reporters after offering a ‘Chadar’ on behalf of the force at the shrine.
The fair became popular in November 2003 following a ceasefire and parallel peace initiatives by both India and Pakistan. While it is held for three days on the Indian side, it is also held for a week in Saidanwali village in Pakistan’s Sialkot district.
“Elaborate security and other arrangements have been put in place for the devotees who have been thronging the shrine since early this morning amid improved weather conditions,” said Anuradha Gupta, the deputy commissioner of Samba.
“We have also offered a Chadar at the shrine on behalf of the district administration and the police, and prayed for peace and progress in Jammu and Kashmir and the rest of the country,” she said. (Agencies)