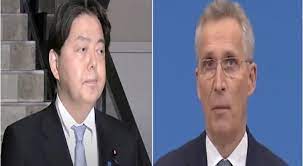 Brussels, Feb 20: Japanese Foreign Minister Hayashi Yoshimasa has discussed the situation in Ukraine with NATO Secretary General Jens Stoltenberg at the Munich Security Conference, the Japanese Foreign Ministry informs.
The two sides reaffirmed their support for Ukraine’s sovereignty and territorial integrity and agreed to monitor the situation closely and to cooperate in order to ease tensions.
The Japanese foreign minister and Stoltenberg also touched upon the topics of cooperation between Japan and NATO, as well as the implementation of the idea of a “free and open Indo-Pacific region.” Moscow has expressed strong concerns over NATO’s military activity near the Russian borders, which it deems a threat to its national security.
Russia has pointed out that Western claims of a looming “invasion” of Ukraine appear to be used as a pretext for advancing NATO’s military presence further eastward in Europe.
The situation on the contact line in southeastern Ukraine (Donbas) escalated this week, with the self-proclaimed people’s republics of Donetsk and Luhansk (DPR and LPR) reporting continuing shelling of Donbas settlements by Kiev forces, in violation of the Minsk peace deal.
On Friday, DPR and LPR announced the evacuation of their citizens to Russia’s Rostov Region amid fears of an attack by Kiev forces. The Munich Security Conference kicked off on Friday. Russian Foreign Ministry spokeswoman Maria Zakharova said earlier this month that the Russian delegation would not attend the event, noting that the conference had been turning into a purely transatlantic forum, losing its inclusiveness and objectivity.
Russia published its security suggestions for NATO and the United States in late 2021 as tensions rose around Ukraine. Moscow specifically requested guarantees that the alliance would not expand eastward to include Ukraine and Georgia, to which Washington has replied by insisting it will not allow anyone to slam NATO’s open-door policy shut.
The US and NATO have since submitted their responses to the proposals but asked Moscow to keep them confidential. Russian President Vladimir Putin said that the West has ignored Russia’s fundamental concerns and demands, including over the alliance’s expansion. Russia delivered its written response to US Ambassador in Moscow John Sullivan on Thursday.