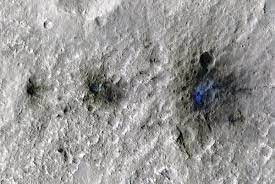 Los Angeles, Sept 20: NASA’s InSight Mars lander has detected seismic waves from four space rocks that crashed on Mars in the past two years, NASA said.
Not only do these represent the first impacts detected by the spacecraft’s seismometer since InSight touched down on the Red Planet in 2018, it also marks the first time seismic and acoustic waves from an impact have been detected on Mars, according to NASA on Monday.
The impacts ranged between 53 and 180 miles (85 and 290 kilometers) from InSight’s location, a region of Mars called Elysium Planitia.
The first of the four confirmed meteoroids – the term used for space rocks before they hit the ground – entered Mars’ atmosphere on September 5, 2021, exploding into at least three shards that each left a crater behind, according to NASA.
The other three impacts occurred on May 27 of 2020, February 18 of 2021, and August 31 of 2021, said NASA.
The four meteoroid impacts confirmed so far produced small quakes with a magnitude of no more than 2.0. The quakes and seismic signals would offer scientists clues to study Mars’ crust, mantle, and core, according to NASA. (UNI)