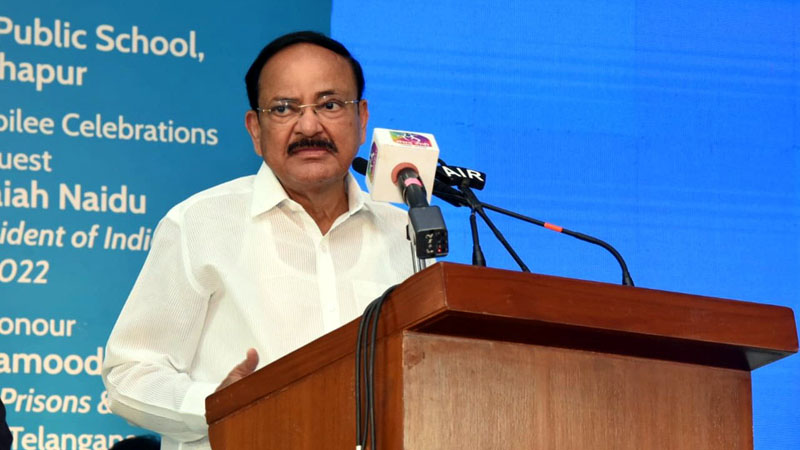 HYDERABAD, July 30: Against the backdrop of a virtual washout during the ongoing monsoon session, Vice President M Venkaiah Naidu on Saturday expressed concern over the way the Parliament functions “sometimes”.
Naidu, who was speaking after inaugurating the Golden Jubilee Celebrations of Hyderabad Public School at Ramanthapur here, advised the students to “love and live with nature” in view of the adverse impact of climate change being witnessed.
“So, my first advice before I say anything is love and live with nature,” he said.
His second advice to students would be to maintain discipline and decorum, Naidu said.
On the occasion, he voiced concern over the functioning of Parliament “sometimes”.
“My second advice (to students) is to maintain discipline, decorum. I told the MPs. Because, you are all aware what is happening at times in Parliament. Parliament is functioning. But, how it functions sometimes, it’s a worrisome fact,” the Rajya Sabha Chairman said.
Since the monsoon session began, Parliament has seen a virtual washout over the opposition demands for a debate on GST on essential items, price rise and others.
The opposition protests also saw suspension of several members from Rajya Sabha and also Lok Sabha.
Further in his speech, Naidu described the New Education Policy (NEP) as a right step in the right direction. The policy should be implemented by all, he said.
“I am very happy that the new education policy, NEP, is a right step in right direction. It should be implemented by one and all in letter and spirit. Very useful. Because, unfortunately, our country was ruled and ruined by foreigners,” he said.
The foreigners “looted, cheated and ruined” the country, he said.
Once upon a time, India was richest country in the world and it was ‘vishwa guru’. Students from across the globe used to study at great institutions like Nalanda, Takshashila and Vikramshila in ancient India, he said.
With the advent of colonial rule, the country has lost its standards, and efforts should be made to see that our educational institutions become centres of excellence, Naidu said.
“We have to, again, go back to the roots and see to it that our educational institutions become centres of excellence,” he said.
India never attacked any country and did not believe in colonialism. We believe in living together, he said.
The primary education of students should be in their mother tongue, he said.
One can learn any number of other languages, including English, but should not forget the mother tongue, he said.
Citing the examples of the President, himself, Prime Minister Narendra Modi and Chief Justice of India N V Ramana, he said they did not study in English medium.
He also advised the students to be physically fit, disciplined, aim high and work hard to realise their dreams.
While emphasising the importance of conserving nature, he spoke about illegal occupations near rivers, roads and others at various places in the country which he said would not give a happy life in the society. (PTI)