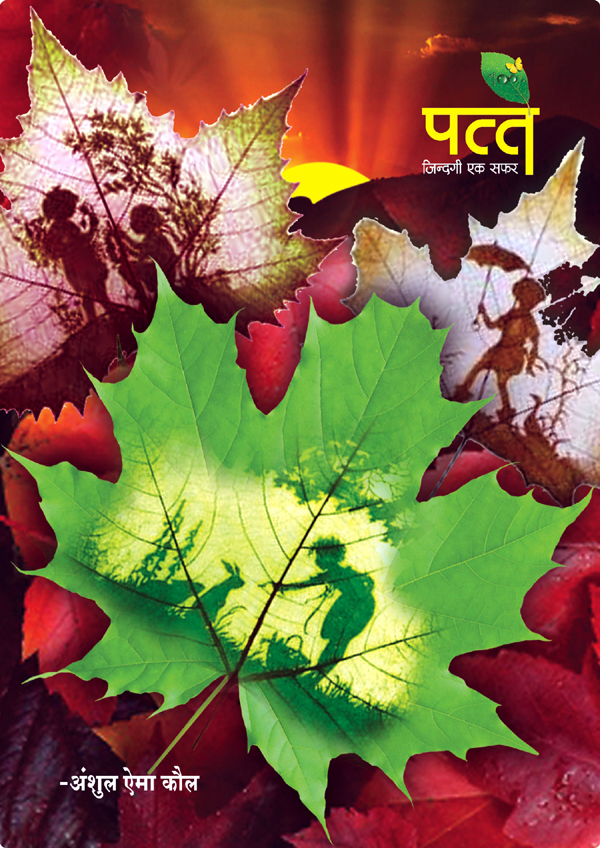 Patey is a collection of Hindi Poems by Ms.AnshulAimaKoul.Anshulis not a new name in the literary circles of Jammu and Kashmir.She has already made a mark as one of the youngest poets of the state with ‘Moods’ a collection of poems in English. An engineer by profession she has yet again combined her analytical ability and emotional depth in this collection of Hindi poetry.
‘Patey – ZindagiEkSafer’ has been published by DG – Learn Publishing house. The cover page is beautifully done with pictures of chinarleaves in different shades of brown, crimson and green.It does full justice to the title of the book.
The book contains sixty one poems,expressing a gamut of emotions and varied expressions. Patey is a double work of art i.e. with each poem that Anshul has penned down she has also visualized the poem in the form of sketches. Not only through the written form but also through these sketches, she in convening the theme of her poems. At the end of each poem the reader will find a very basic sketch related to the emotions expresses in the poem. It does convey that Anshul is capable of conveying her thoughts not only through words but also through her brush.
The poems in this collection do not adhere to the orthodox structure of poerty. The poetess has used the style of free verse in almost all of her poems. Through one of her poems in this collection titled – ‘Mai KavitriNahi’ – Anshul is conveying that she is not a traditional poet but just an ordinary human being who has chosen to pen down her emotions and feelings. This is humbleness at its zenith. In a world looking for appreciation Anshul is looking for understanding.
Using a train as a metaphor in the poem ‘Ekanth Chaiye’ she is creating a bigger picture, giving an idea that we should all listen to our inner voice. It also conveys the desire of the Poetess to realize herself, to come above the ordinary and mundane. It is like she is seeking a spiritual awakening, searching her soul and listening to her inner voice over the din of the daily life. She is actually not seeking seclusion but an awakening.
Through a very ordinary theme in the poem ‘Bikhari’, Anshul is trying to arrive at a profound truth that is – do not accept whatever life dishes out to you – fight back. Another poem ‘Rakh Na Banna Tum’ is also on the same lines,encouraging us to continually push ourselves and to never in any circumstances let the fire go out. In fact the first poem ‘Rakh’ very beautifully captures the adage that experience brings in maturity. Dousing of fire does not mean the end, it means the beginning of a new you. The last line of the poem artistically encompassesthis idea.
‘Agni mai Jawalahai, Peedahai,
Rakh Komal hai,
Sheetal hai,
Par Rakhtabihai, Jab Jawalahai’.
If on one hand she is musing about the invincibility of human dreams in ‘NamumkinKuchBhiNahi’ a few pages later in ‘Ankhihai, per Nazar’ she is conveying a fear of visualizing your dreams. The deftness with which Anshul is able to tackle two opposing ideas in two different poems on the same theme really goes to show what a deep understanding she seems to have.
In yet another poem ‘Imtiyhan’ Anshul reflects upon perseverance of moving over and beyond, the tenacity of human spirit, not being afraid of facing life but being one step ahead:-
‘ParbhatkeUnchai se Uncha
ChidiyakiUdhanDelehtihai,
WaqtkaesaathNahi,
WaqtkaeAageRahtihai.’
Something similar is reflected again in the poem ‘KabhiKabhi’. It is a never to say die attitude right from the first time of this poem to the last.
The poems in this collection are dealing with human nature. They are analysing different human characteristics. They are also reflecting upon negative attitudes whether in life or relationships, but in most of the poems Anshul is trying to close on a positive note. Looks like she strongly believes in the philosophy that if there is evil there has to be good too, if there is ugliness there has to be beauty too. Anshul does not give up but tries to find a foothold in optimism, never mind the circumstance.
The language is quite simple, it is not difficult for a lay man to understand the poems. Most of the poems are related to day to day happenings and things around us but have a deeper meaning behind the simple facade. There are though a few poems here and there which are dealing with the same themes. But at the same time it is quite an interesting read.