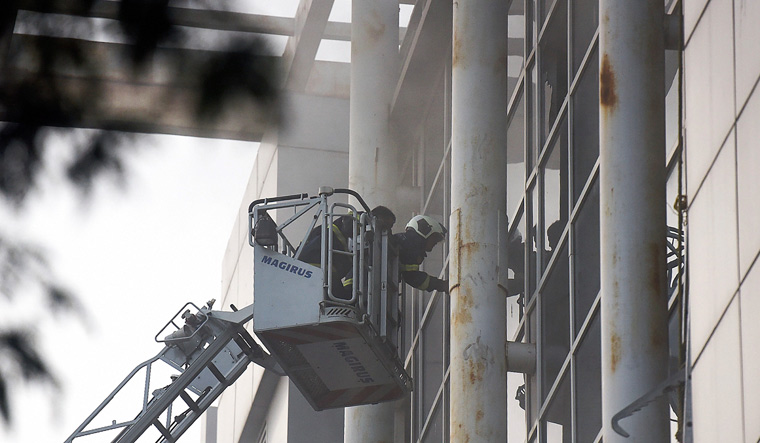 MUMBAI: The death toll in the blaze in a Government hospital here rose to eight Tuesday, while 176 injured people, including three firemen, are being treated in different hospitals across the city, an official said.
The deceased include a six-month-old girl.
Among those admitted, almost 25 are reported to be critical while 26 were discharged after primary treatment, said the official of the Brihanmumbai Municipal Corporation’s (BMC) disaster management cell.
The 325-bed ESIC (Employees State Insurance Scheme) Kamgar Hospital at Marol in suburban Andheri was constructed in 1970s. Police and hospital authorities have vacated the building, he added.
While six people had died in the blaze on Monday, two more succumbed to their injuries later in different hospitals, the official said.
Nearly 375 people, including patients and visitors, were in the five-floor hospital during visiting hours when fire and smoke were reported on its fourth floor around 4.03 pm on Monday, according to a fire brigade official.
“The fire was extinguished at 7.35 pm, and hospital authorities shut down the facility till further notice,” he said.
“Most of the deceased, including the six-month-old child, died due to suffocation,” he said.
Several women who recently delivered babies managed to save their newborns by rushing out of the building while wrapping the children in their arms, he said.
The building’s glass facade posed a hindrance as it blocked air passage and firemen had to break the glasses on all the floors to evacuate those stranded inside, he said.
Milind Ogle, the deputy chief fire officer of the MIDC area, said the hospital doesn’t have the final no-objection certificate for fire compliance.
“The hospital applied for the final NOC a fortnight ago for its under-construction building adjacent to the old structure that caught fire,” he said.
“When our team visited the hospital to inspect the conditions for fire compliance, it found certain shortcomings in the installations and it was communicated to the hospital administration,” Ogle said.
While reviewing fire compliance norms for the new building, the team also noticed some lacunae in the old hospital building, he said. “So we refused to issue the full and final fire NOC to the old building also,” he added.
Hospital medical superintendent Dr Rakesh Sharma said everything happened suddenly. A hospital staffer received injuries on his arm when he jumped out of the building to save his life, he added.
A fire official said the blaze appeared to have erupted after a short-circuit near the rubber rolls stored on the ground floor.
“The rubber rolls are combustible material and they might have caught fire after the short-circuit on the ground floor. The smoke then spread on the upper floors through an open fire duct,” he said. The exact cause would be known after an inquiry into the incident, he said. (AGENCIES)