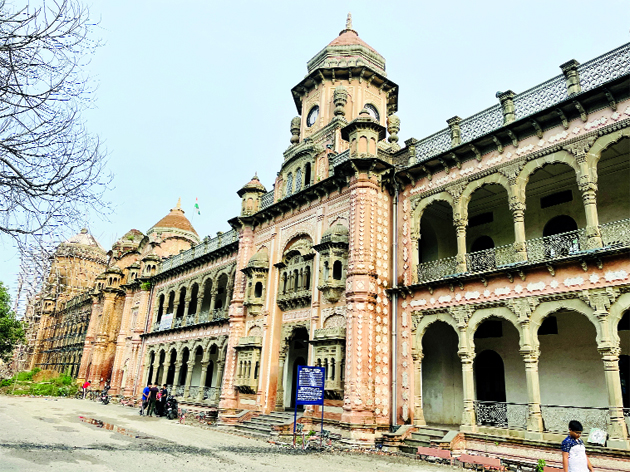 Govind Sharma
Mubarak Mandi complex is the heritage and legacy of Jammu. In Mubarak Mandi, a Royal Record Office was made during the rule of Maharaja Ranbir Singh (1857-1985). All types of secret, historical and royal records were preserved in this Royal Record Office.
This Record Office was given the shape of an archive. While Maharaja Partap Singh kept more important documents in this record office, Maharaja Hari Singh reorganized this Record Room in 1928 during his rule. He converted it into the Central Record Office and appointed Sardar KM Pannikkar as its first director. In 1947, the Government of India brought this Central Record Office of Mubarak Mandi Complex under the State Archives Department.
The Department of Archives, Archaeology and Museums with its primary mandate to preserve the tangible heritage of Jammu and Kashmir is looking after too museums, 48-State protected monuments and 2 archives repositories. The Department has its establishments in both the divisions of the Union Territory. The Department has the distinction of possessing one of the oldest Archival Repositories in the sub-continent with record holdings dating back to Mughal period (1724 AD).
The two Archives Repositories, one each at Jammu and Srinagar are housing approximately 14 lakh files of administrative and historical importance. The Srinagar Archives Repository is housed in Old Secretariat Complex Srinagar and Archives Repository Jammu in Mubarak Mandi Heritage Complex Jammu. The historical records in Jammu Repository are indexed upto 1947 while as in Srinagar Repository records are duly listed.
The Archive at Mubarak Mandi in Jammu is housing more than 6 lakh files of administrative and historical importance dating back to 1724, which is a matter of great pride for Jammu. The holdings in this archive include Persian records, administrative reports, census reports, maps, newspapers, manuscripts, revenue settlement reports, council proceedings, council orders, various commission reports, gazettes, cabinet proceedings, land valuation reports and revenue records of Maharaja period.
One can find details about Dogra period and even details about construction of roads and the money spent on the construction during this period in this archive. The records except confidential are open to public and scholars. During Maharaja rule, this archive was used to be viewed with much respect but in last few decades, very few documents have been shared with the Archives Department by different departments of J&K.
This archive is the treasure of our history, present and future. People from not only Jammu but also from abroad come to the State Superintendent Store Reference Library. The new wing of the National Register of Records has been functioning since 1980. Its main objective is to preserve the rare manuscripts. There are 188 rare manuscripts in this wing. Rare Ramzan of 17th century on copper sheet and rare manuscripts written on copper plates in Sharda script have also been preserved here.
There are also two such files named ‘Fall of stones from Heaven in Kashmir in the Year 1912’ and ‘Fall of Snakes with Snow in Kulgam Tehsil and Performance of Shanti Pooja in this connection’ (1914 A.D.) The Department has record of 12,000 bags and out of them 2800 bags have already been sent to Kala Kendra. History lovers have a lot of affection for this place. This is the place where you get a chance to know, understand and identify your state as well as open the layers of the history.
Akash Jyutushi, a PhD Scholar from Jammu University, who was reading some historical books in the Reference Library said this archive of Mubarak Mandi is very rich. There are only few archives in north India where the documents have been stored in such a systematic way like here in this archive. He said if we see this with modern view point, we get a lot of information from this archive. “Since establishment of princely state of J&K in 1846 by Maharaja Gulab Singh till 1947 and even after that period, there are all important historical documents and important records. Here we can see letters written by Maharaja Hari Singh to their friends in other parts of the country and even abroad. There are also records available regarding social reforms taken by Maharaja Hari Singh during his rule such as untouchability, entry of lower classes in temples, etc,” he said.
Shivli Jasrotia, a student of History Department of Jammu University said that there are different books of different subjects in this Reference Library and staff is very cooperative. She said all the records available in the archive and reference library should be digitized so these can be assessed easily by scholars and students across the country as well as foreign universities in the comfort of their homes.
Speaking to Excelsior, Assistant Director, Department of Archives, Archaeology and Museums, Dr Sangeeta Sharma, said that at present, the Mubarabak Mandi Archive has about 6 lakh manuscripts, historical documents, census reports, administrative reports and other historical documents. For the scholars, she said, they had recently started a Reference Library in this archive which is very rich as there are about 27,000 books of different subjects.” University scholars and students from colleges and schools also come here to study. Along with this, foreigners also come here to study history of J&K,” she added.
Dr Sharma said with a view to preserve the important historical records in electronic image form and facilitate easy retrieval system for scholars and put on official website, lakhs of pages of important archival records have been digitized so far and the process is going with priority being given to digitization of important records first.