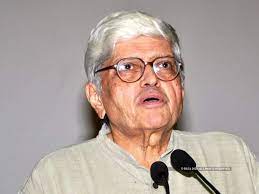 NEW YORK, Sept 15: The most important cultural resource that India has to protect, foster and offer to the world is its legacy of pluralism, belief in all its multiple faith and traditions, Gopalkrishna Gandhi has said, cautioning that he fears this may be squandered by “sheer default and neglect.”
Gandhi, the grandson of Mahatma Gandhi, was in conversation with economist Swaminathan Aiyar and venture capitalist Asha Jadeja Motwani at a panel discussion at the Jaipur Literature Festival (JLF) New York.
The panel discussion at the Asia Society here on Wednesday was moderated by Ramu Damodaran, a Senior Fellow at the Center for Social and Economic Progress in New Delhi and Honorary Adviser to the Permanent Observer Mission of the University for Peace to the United Nations.
“The most important cultural resource of India which it has to protect and which it has to foster and to offer to the world is the legacy of India’s pluralism, India’s belief in all its multiple faith, traditions…. And that I feel and fear is something which we may squander by sheer default and neglect,” Gandhi, a former governor of West Bengal, cautioned.
“And I am very conscious now of the multiple uses of the very word ‘culture’ in today’s political narrative. Culture can become today something that is very different from what it meant to my generation or the generation before mine. It can mean something which is very narrow and very intolerant,” Gandhi said.
Aiyar said that historically, conquerors destroyed heritage.
“It was a sign of showing your power, your might that you went to the palaces, the temples, the places of worship, destroyed them to show how great and powerful you were,” he said.
Aiyar referred to the destruction of the Bamiyan Buddhas by the Afghan Taliban, ISIS and other Islamic groups destroying the most ancient monuments in Timbuktu, looting of museums in Baghdad and Afghanistan and idols disappearing from temples in India and ending up in galleries and museums in New York and London.
“Unfortunately, we have a situation… Russia has engaged in a war in which apparently a significant amount of heritage is getting destroyed,” he said.
“But the narrower nationalisms… without having a war in India, we are having a situation where the destruction of heritage is regarded as a great thing. The Babri Masjid was destroyed by a particular crowd, and they were so happy about it. There was no question of regarding it as the heritage of all Indians, but this is the property of the enemy that must be destroyed,” Aiyar said.
“There is a similar attitude that we see in regard to the Gyanvapi Mosque, Idgah in Mathura and there are perhaps 3,000 other such who are under the target of a group of people who believe that destruction of all that is the appropriate triumph of a particular cultural value of Hinduism,” he said.
And this is something that we need to fight against, Aiyar said.
He said that whether he visits the Brihadishvara Temple in Thanjavur, the Basilica of Bom Jesus in Goa, Sidi Saiyyed Mosque in Ahmedabad, the Taj Mahal or the Jewish synagogue in Cochin, he feels that they all belong to him.
“These are also mine…It has nothing to do with religion. It belongs to all of us, we should all treasure it. So I think these are the values we need to push forward with. And we need to fight against the enormously strong forces that we now see that are out to pulverize our heritage instead of conserving it,” Aiyar said.
Gandhi added that the tools of protection and preservation have not advanced and are exactly what they were 50-100 years ago, “which is basically speaking the truth, saying it as it is.”
“But the tools of distortion have expanded exponentially. The way in which anything that exists can be portrayed differently from how it is, that has changed.
“The technologies at the hands of distortion and therefore of destruction, are growing menacingly fast. But the methodologies of protection are exactly where they were. And so there’s almost a losing battle between preserving what is true and what is authentic and the opposite,” Gandhi said.
Motwani said that technology has always been a double-edged sword and as far as the internet goes, it’s easy to amplify the good and the bad.
“This is something that has had dangerous implications not just in authoritarian, communist societies, but also in democracies, powerful democracies, like the US and India where we have seen the current battlefield is the battlefield of narratives.
“And we find people from multiple sides of the aisle creating their own narrative using tools and understanding that we all have from the world of advertising or marketing and leveraging those understandings to see how we can influence the behavior of people who are not fully informed,” Motwani said.
She added that that has created powerful and damaging conditions.
The panel on Wednesday focussed on ‘Pax Cultura: The Banner of Peace’, symbolic of the Roerich Pact, which is the first international treaty dedicated to the protection of artistic establishments, scientific institutions and historical monuments.
The pact was proposed by Russian artist, philosopher and writer Nicholas Roerich, illustrated after he had shifted to India, and signed in 1935 by US President Franklin Roosevelt along with representatives from 20 Latin American countries. It was a “global coming together to ensure the longevity of artistic and cultural treasures.”
The original painting is in the custodianship of the Delhi Art Gallery.
The session at Asia Society during the day-long JLF New York observed “the cultural and historical significance of a Pact that famously preceded the formation of the United Nations while evaluating its humanitarian significance in today’s world.” (PTI)