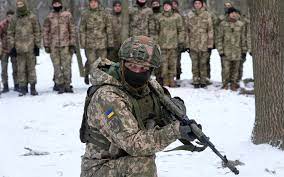 London, Jan 23: The UK foreign office has revealed to have information that the Russian Government is planning to “install a pro-Russian leader in Kyiv as it considers whether to invade and occupy Ukraine”.
“The former Ukrainian MP Yevhen Murayev is being considered as a potential candidate,” the British Foreign, Commonwealth and Development Office said on Saturday.
However, Murayev refuted the claims. CNN quoted him as saying that “there is nothing to comment on” regarding the allegations, as he is a Ukrainian national and still facing Russian sanctions.
According to the UK’s statement, there are four other former Ukrainian official with whom Russia has links.
“We have information that the Russian intelligence services maintain links with numerous former Ukrainian politicians”, it said.
The names include Serhiy Arbuzov, First Deputy Prime Minister of Ukraine from 2012 to 2014, and acting Prime Minister in 2014; Andriy Kluyev, First Deputy Prime Minister from 2010 to 2012 and Chief of Staff to former Ukrainian President Yanukovich, Vladimir Sivkovich, former Deputy Head of the Ukrainian National Security and Defence Council (RNBO); Mykola Azarov, Prime Minister of Ukraine from 2010-2014, the statement noted.
“Some of these have contact with Russian intelligence officers currently involved in the planning for an attack on Ukraine,” the foreign office said.
CNN quoted a source briefed on the US and British intelligence confirming that the US has similar evidence as the UK, regarding Russia’s plot to install a friendly government in Ukraine.
“Yes, we have seen the intelligence that Russia is looking at ways to minimize a long, drawn out war. That includes things like installing a friendly government and using its spy agencies to foment dissent,” the source said.
Meanwhile, Russia has denied the allegations that it plans to attack Ukraine.