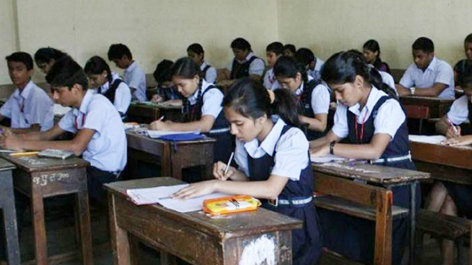 SRINAGAR, Nov 16: After the students of Class 10th and 12th appeared in their annual examinations, more than 80000 Class 8th students while braving cold today appeared in their annual examination conducted by the State Institute of Education (SIE) in more than 900 centres set-up across Kashmir division.
Principal SIE, Mehboob Hussain told Excelsior that 84,641 students appeared in the examination at 978 centres set-up across Kashmir in various private and Government schools. Previously, for annual examination of Class 10th, 65,000 students showed their appearance across 413 exam centres, while as for Class 12th examination 48000 students showed their presence across 433 exam centres.
The officials said that the proper arrangements were made in order to facilitate the smooth conduct of the examination across Valley. The examination began 10 am in the morning and ended at 12: 30 p.m. The first paper, Science, was scheduled to be held on November 11; however, same was postponed due to the heavy snowfall ahead of it.
With regard to the attendance of the students appearing in the examinations, Mehboob said that 99 per cent attendance was recorded in the examinations. Previously, almost the same attendance for the Class 10th and 12th was witnessed. “The attendance was exceptional and the credit goes to students for showing up for their exams; we did everything to facilitate the smooth conduct of exam,” he said.
While the authorities said that the arrangements were put in place, the students complained that no substantial heating arrangements were made inside the examination halls, making them face difficulties in writing the paper. The students were up early in the morning and were seen marching towards their respective exam centres being accompanied by their parents. “While many of friends said that proper heating arrangements were made, there were few schools in Srinagar where the students were literally freezing due to cold,” a student said.
Parents of the students also said that the authorities could have changed the timing of the examination and instead of morning, they could have conducted it around noon, “particularly, for Class 8th students, the authorities could have changed the exam timing as they were freezing,” a parent said.