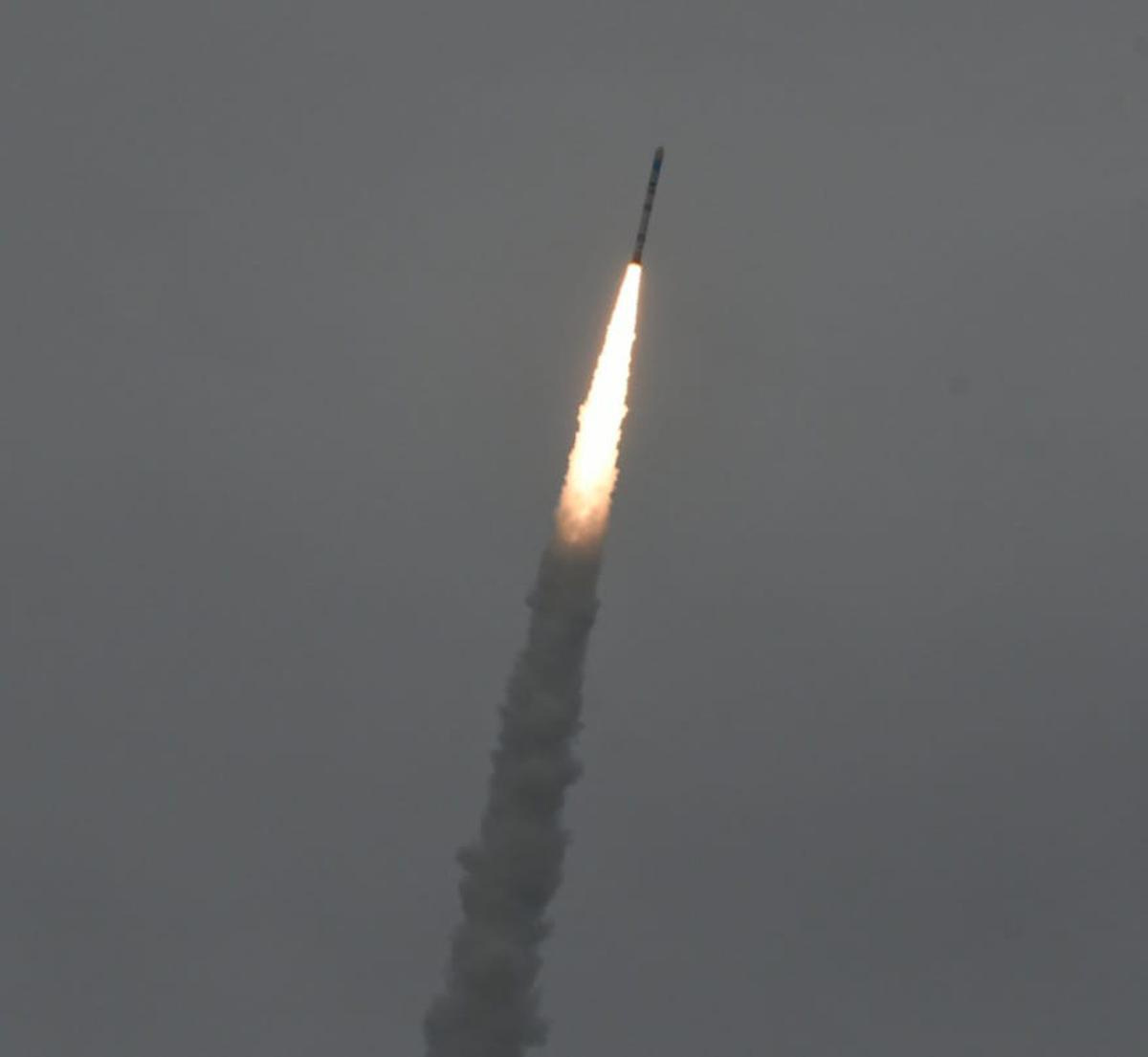 Sriharikota, Aug 7: Indian Space Research Organisation’s (ISRO) tryst with history suffered a setback on Sunday, as the maiden Small Satellite Launch Vehicle (SSLV) suffered “data loss” at the terminal stage, although three stages “performed and separated” as planned and the scientists were “currently analysing” the data to ascertain the cause behind it.
On Sunday morning, in its mission to place an earth observation satellite and students satellite into the low earth orbit, the SSLV-D1/EOS-02 blasted off precisely at 9.18 a.m. amid cloudy skies from the first launch pad at Satish Dhawan Space Centre in this spaceport.
The 34-metre long rocket soared majestically on completion of its nearly seven-and-half-hour countdown on Sunday.
The scientists at the Mission Control Centre gave updates about the health of the rocket soon after lift-off.
Screens at the Media Centre showed that the satellite was well on its trajectory before suffering “data loss” as described by ISRO Chairman S. Somanath.
“All stages performed as expected. The first stage performed and separated, second stage performed and separated, the third stage also performed and separated, and in the terminal phase of the mission, some data loss is occurring and we are analysing the data and we will comeback on the status of the satellites as well as the vehicle performance soon,” he said from the Mission Control Centre, minutes after the launch.
Anxiety among ISRO scientists
A jubilant mood at the Mission Control Centre soon made way to anxiety as scientists were seen glued to the computer screens and confused, before Mr. Somanath updated the mission status.
There has been no official word on whether the mission was successful, as currently scientists were analysing the data from the rocket and so far there has been no official confirmation on the success of the mission.
From the screens displayed at the Satish Dhawan Space Centre, it was seen that the two satellites — Earth Observation Satellite and the AzaadiSAT — got separated as planned.
After establishing itself with successful launches of various satellites using its Polar Satellite Launch Vehicle (PSLV) and Geosynchronous Satellite Launch Vehicles (GSLV), ISRO had targeted the SSLV market which places the satellites into 500 kms low earth orbit.
EOS-02 and AzaadiSAT
The Earth Observation Satellite EOS-02 and the co-passenger student satellites AzaadiSAT are the major payloads for the SSLV.
The EOS-02 is an experimental optical remote sensing satellite with a high spatial resolution. It is to realise and fly an experimental imaging satellite with a short turnaround time and to demonstrate launch-on-demand capability. EOS-02 belongs to the microsatellite series of spacecraft.
The AzaadiSAT is a 8U CubeSat weighing around 8 kilograms. It carries 75 different payloads each weighing around 50 grams. Girl students from rural regions across the country were provided guidance to build these payloads.
The payloads are integrated by the student team of ‘Space Kidz India’. The ground system developed by ‘Space Kidz India’ will be utilised for receiving the data from this satellite, ISRO said.
Reliable PSLV too failed its first flight
It is not the first time for ISRO to face a setback on its maiden launch missions as PSLV — dubbed as one of the trusted workhorses for the space agency — was not successful in its first flight way back on September 20, 1993.
After its first successful launch in October 1994, PSLV emerged as the reliable and versatile launch vehicle of India with 39 consecutively successful missions by June 2017.
It had successfully launched the CHANDRAYAAN-1 in 2008 and also the Mars Orbiter Spacecraft in 2013 that later travelled to the Moon and Mars, respectively.
The first flight of GSLV in April 2001 carrying GSAT-1 was successful for ISRO. From January 2014, the vehicle has achieved four consecutive successes, ISRO said.
The first developmental flight of GSLV Mk-III, successfully placed GSAT-19 satellite to a Geosynchronous Transfer Orbit (GTO) on June 5, 2017. (Agencies)