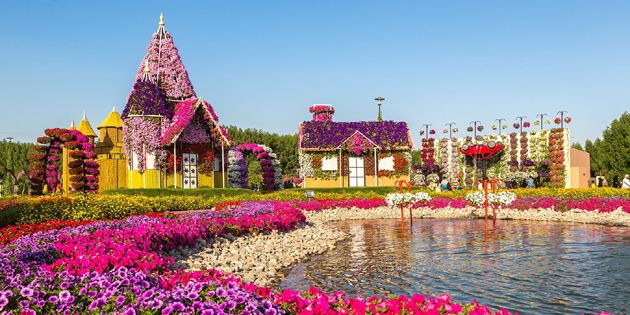 Ashok Gupta
The Dubai Miracle Garden is a flower garden located in  Dubai, UAE. The garden was launched on 14 Feb.2013.The Garden occupies over 72000 sq. mt.
The concept of the first Miracle garden was conceived under the agreement between Dubai land and the Dubai properties group destination. The project development was conceived under the agreement with Akar Landscaping and agriculture company led by Jordanian Businessman Abdul Naseer Rahal owner designer and Agriculture Engineer. Initially the cost of project was estimated  of AED 40 million (11 million U.S. Dollar. This is as per statement of Mr. Waleed care taker who is also Agriculture Engineer when I met him in the Garden.
According to Mr. Waleed  phase one of the projects was completed and opened on 14 Feb 2013  which is also celebrated asValentine day. It consists of 21000sq.ft outdoor facility including vertical and horizontal landscape where each of them has its own design.  The phase one took two months and 400 workers and phase two  includes the floral clock, butterfly garden, retail stores, mosque.
The Garden operates from October to April and remains closed from June to September when  temperature soars to more than 40 degree centigrade and which is not conducive for flower growing. The park opens from  9 A.M to                               9 P.M and entry for adult is 45 ADH and children for 35 ADH approximately  it is equal Rs 700 for Adults and RS 500 for children.
When I enquired about the timing of workers for filling the gaps of damaged flowers and other repair works, the care taker Mr Waleed replied. The damaged spots are marked in day but everything including replacement of flowers is  done by different sections from 9P.M to 9A.M and when the garden is open no repair and replacement of flowers is  done.’’
The flowers are being maintained by re-use of waste water through drip irrigation method with an average amount of 757082 liters of water per day. This garden  also has the credit of first ever Dubai butterfly garden, the worlds  largest, other attractions include floral clock, peacock and an aromatic section.
(The author is former Joint Director Floriculture)