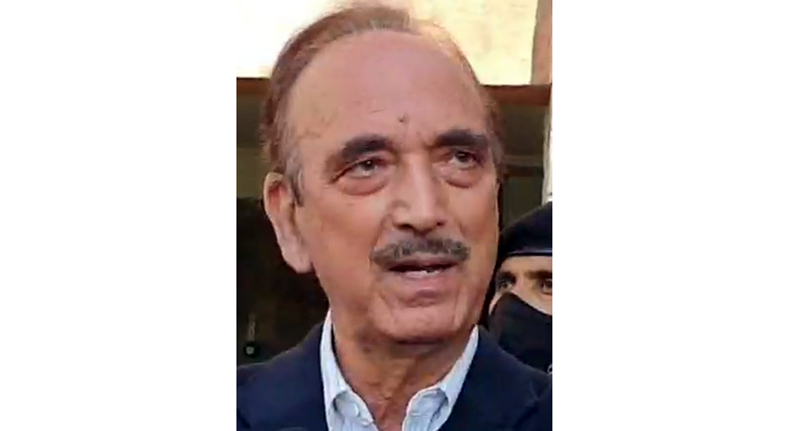 JAMMU, Oct 20: Senior All India Congress Committee leader and former Union Minister Ghulam Nabi Azad today said that militants in Kashmir have adopted a new modus operandi of killing their targets by using pistols from close range, instead of grenades and mines.
During this month alone, 11 civilians, including non-residents of Jammu and Kashmir, have been shot dead by militants in different parts of Kashmir.
“There seems to be a shift in the strategy of militants. Earlier, about 30 years ago, they would use grenades and landmines. Then they would eliminate their targets openly and moving vehicles. Now, we are in the fourth stage where they pass close to a civilian target and kill him,” Azad told media-persons at Srinagar while leaving for Jammu this afternoon.
Azad, who met many delegations including workers from various parts of Kashmir at his residence, said the people of the Valley are against the killing of innocent civilians.
“People of Kashmir are ten-times more against these killings than people elsewhere in the country,” he said. Click here to watch video
Referring to the recent civilian killings, he said that everyone he met condemned these brutal killings. “Be it a Muslim, Sikh, Hindu or Kashmiri Pandit, the people of the Valley are more concerned about the killings than rest of the country as fear has gripped the people that a backlash will be in Srinagar and not elsewhere in the country.”
“Entire Valley is unanimously against these targeted killings and of course, people of the Valley have never supported militancy as this has pushed the Valley into economic disruptions and backwardness. Security forces have to find a solution and unless they catch hold of 2-3 people to know modus operandi, it is difficult to find solution. Therefore, it should be done soon,” Azad said.
He said the purpose of his interactions was to ascertain the ground situation. “I wanted to find out from our constituency workers whether militancy has increased or decreased and whether people want Statehood or not, among other issues, ” he said.
Veteran Congress leader further said that in democracy, bureaucrats are meant for official works instead of running a democratic system and stated that Statehood should be restored without any more delay. He also pleaded that Centre must also start elections process in the J&K as soon as possible.
“Nobody is against Lt Governor Manoj Sinha here. Restore statehood and let him be the Governor of the State as well. In a democracy, you cannot have the rule of officers,” Azad maintained.
“In Raj Bhavan, the Governor may be there with all the good intentions but ultimately a popular Government is required for the people who can better understand the aspirations and issues of common people,” senior AICC leader added.
Azad said the development works which are much required in J&K would be best initiated by elected representatives of the people. “Solution to the problems of the people can be sought in much better way by elected representatives and not by officers and bureaucrats,” Azad remarked.
“I must say that elections in India are held almost every month, in one or the other State. So, it is not fair to say that killings increase before any elections,” Azad remarked.
He said during his visit he met leaders and party workers from 10 districts of Kashmir and one (Ramban) from Jammu region. “I met hundreds of people here and around 60-70 delegations. It was an eye opener as I met a lot of people and came to know about their difficulties and aspirations,” the Congress leader said.
Replying to a question about laying of foundation stones of new projects and development works in the Valley, Azad said that putting a foundation stone at a green field will never take off. “The administration should instead of laying new foundation stones, first create a mechanism to increase the local resources so that development works will be beneficial to the local populace.”
Azad was on a three -day visit to the Kashmir Valley, where he met the Congress leaders along with several other delegations of political parties, trade union bodies, civil society members and members of Chamber of Commerce and Industry.
He advised the party functionaries and others to keep close watch on the growing situation and highlight with the administration, the concern of the innocent citizens and minorities and the sufferings of the labourers returning to their native places, but facing great hardships without any help from the Government.
Meanwhile, Azad arrived in Jammu from Srinagar this afternoon. He met several party leaders and functionaries and took stock of the situation. He would attend a private function (marriage) during the day on Thursday and meet several delegations of party workers, traders and members of the civil society in the evening. He would return to Delhi on Friday, a senior party leader said.