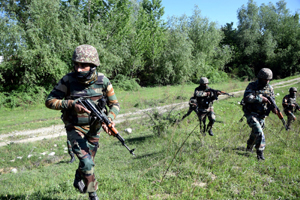 Srinagar, May 16: Militants today overpowered a cop posted inside Kashmir University campus at Hazratbal on the outskirts of Srinagar and snatched his rifle while a group of militants fled from the cordon in South Kashmir’s Shopian district after a brief gun battle.
Militants overpowered a security guard and snatched service rifle from his possession. Police has launched investigation to the case.  Click here to watch video
In the meantime, militants this evening fled from security forces cordon in South Kashmir’s Shopian district after a brief gun battle.
A joint team of Army’s 23 Para Commandos, SOG and CRPF launched a cordon-and-search operation at Jamnagri area of Shopian district this afternoon.
As the security forces were zeroing in on a specific target in the orchards, militants hiding in the area opened fire. The security forces retaliated triggering a gun battle. However, militants fled by firing on the troops. Security forces later searched the area for the militants.
And this morning, militants attacked an Army’s patrolling party in Tral forests of South Kashmir’s Pulwama district.
A group of militants opened fire on the Army’s 42 RR near Koil Shikargah forest area at around 8:30 am today.
The soldiers retaliated by firing on the militants. However, there was no casualty on either side.
Soon after the attack, the reinforcements were rushed to the area and the whole area has been cordoned off to nab trace out the militants.
And two persons received splinter injuries in a blast near Pincho Mandi in Chattabal area of Srinagar this afternoon.
A mysterious blast occurred near Pincho Mandi and two civilians received minor injuries. The area was immediately cordoned off. Sources said that militants hurled grenade on the CRPF. However, no one was injured.
An operation launched yesterday morning by security forces in Rajwar forests of North Kashmir’s Handwara area in Kupwara district continued today. Army’s 21 RR and Handwara Police cordoned off vast forest area in Rajwar as part of area domination ahead of summer when militants who infiltrate from Pakistan occupied Kashmir (PoK) are received in the area by reception parties of militants. The operation is still on but so far the militants have not been traced.