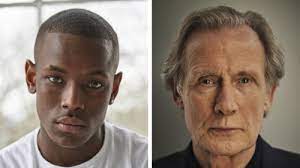 Los Angeles, Aug 4: Veteran actor Bill Nighy and Micheal Ward, best known for “Small Axe”, are teaming up for a feature film titled “The Beautiful Game”, set against the backdrop of soccer.
The movie, which will be released on Netflix, will revolve around a group of English homeless footballers who compete in the Homeless World Cup.
According to Deadline, Thea Sharrock of “Me Before You” fame will direct the film from a screenplay penned by Frank Cottrell-Boyce (“The Railway Man”).
Led by their coach Mal (Nighy), the film follows the soccer team as they travel from London to Rome for the Homeless World Cup. At the last minute they decide to bring with them talented striker Vinny (Ward), but he must confront his own issues to help the team and move on with his own life.
Valeria Golino, Callum Scott Howells, Kit Young, Sheyi Cole, Robin Nazari, Tom Vaughan-Lawlor, Susan Wokoma, Layo-Christina Akinlude and Cristina Rodlo also round out the cast of the film.
Graham Broadbent and Pete Czernin will produce for Blueprint Pictures along with Anita Overland.
Blueprint’s Ben Knight and Diarmuid McKeown are attached as executive producers alongside Ollie Madden and Daniel Battsek at Film4, which helped develop the feature film.
Production on the movie is underway in Rome and moves to London later this year.
A film on the same subject was mounted at Fox Searchlight, with Colin Farrell and Brendan Gleeson attached to star. (PTI)