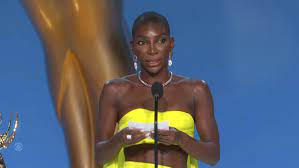 Los Angeles, Sept 20: Actor-writer Michaela Coel scored an Emmy award in the outstanding writing for a limited series category for her hit and critically-acclaimed series “I May Destroy You”.
In the HBO show, Coel starred as Arabella, a young woman who seeks to rebuild her life after she recalls being drugged and raped at a local nightclub.
The show, which is based on Coel’s personal experience with sexual assault, bested fellow nominees “Mare of Easttown”, “The Queen’s Gambit” and “WandaVision”.
“I May Destroy You” was created, written and co-directed by Coel and Sam Miller and received glowing reviews upon its premiere last June.
Coel dedicated the story of the show “to every single survivor of sexual assault”.
“I just wrote a little something for writers,” she said during her acceptance speech.
“Write the tale that scares you, that makes you feel uncertain, that isn’t comfortable. I dare you — in a world that entices us to browse through the lives of others to help us better determine how we feel about ourselves, and to in turn feel the need to be constantly visible, for visibility these days seems to somehow equate to success — do not be afraid to disappear from it, from us for a while, and see what comes to you in the silence,” she further said.
Coel was also nominated in three other categories for producing, directing and acting in the series.
The show received nods in categories like contemporary costumes, music supervision, casting for a limited series, directing for a limited series (twice), supporting actor in a limited series for (Paapa Essiedu), and limited series.
The win for “I May Destroy You” comes months after it was left out at this year’s Golden Globes, which sparked a controversy following a Times investigation of the Hollywood Foreign Press Association that revealed the organisation had no Black voters.
Later, the show bagged two trophies in the categories of the miniseries and leading actress for Coel at the BAFTA Awards. (PTI)