WAYANAD, July 2: Congress leader Rahul Gandhi on Saturday said the Mahatma Gandhi National Rural Employment Guarantee Act played a saviour for millions of Indians during the time of the COVID-19 but Prime Minister Narendra Modi was not ready to acknowledge the relief and security provided by the UPA government-implemented scheme to the hapless people of the country.
Criticising Mr. Modi for describing the MGNREGA as one of the “living monuments of the failures” of the Congress-led UPA, he said the PM had not understood the depth of the mass employment scheme and he did know how it has transformed the labour market of the country and how it became the last resort and huge protection for lakhs of people.
As the economy of the country was crippled due to demonetisation and “faulty” implementation of the GST, the scheme has become even more important now to protect the livelihood of the common people, the Wayanad MP said.
He was addressing a gathering of MGNREGA volunteers at Nenmeni, a tribal dominated village panchayat, in his Parliamentary constituency Wayanad.
“I was watching during COVID when thousands and thousands of people were left without jobs and MNREGA saved them. Of course, the PM did not comment about MNREGA then. And he does not comment about MGNREGA anymore,” Mr. Gandhi said.
Because, it became obvious that what he had called as the monument of the failure of the UPA was actually protecting India during the pandemic period, he added.
He recalled the huge resistance put up by bureaucrats and others against the MGNREGA when the UPA government brought the scheme claiming that it was going to be a huge loss of money.
But, the idea was to build the country with dignity, use our own people to build the nation’s infrastructure and ensure dignity of labour, Mr. Gandhi said.
“It was designed to protect our people and in no way it was a tool for charity,” he said, adding that he was shocked to see Modi speak against MGNREGA in Parliament and call it as a living monument of the failures of the UPA government.
Pointing out that the rural employment guarantee scheme was only one part of the solution, he said the economy of the country and the creation of jobs are the engines of the programme and if they are not working properly the MGNREGA would become useless.
“It requires harmony in society. These are some of the challenges being faced by the country…we should work unitedly to resolve this,” he said.
Calling the MGNREGA employees as the “builders of the nation”, he also criticised the media for not giving adequate space or priority to their work.
The media talks about cricket and Hollywood but was not giving enough priority to the exemplary work showcased by ordinary employees, Mr. Gandhi added.
He also urged the Centre to consider the requests of the people regarding the extension of the MGNREGA work to 200 days, increase their daily wages to ₹400 and expand the scheme to areas like paddy cultivation. (Agencies) 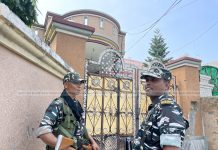