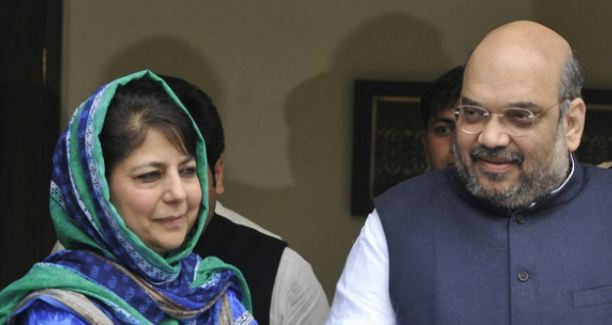 SRINAGAR: In a strong rebuttal to BJP chief Amit Shah’s allegations against her government, PDP supremo and former Jammu and Kashmir chief minister Mehbooba Mufti today said several “false charges” have been levelled against her party and asserted that her commitment to the common minimum programme never wavered.
Breaking her silence on the series of allegations levelled by her former ally, the BJP, on the state government led by her, Mehbooba said it was sad to see the saffron party disown its own initiative and label it a “soft approach”.
“Many false charges levelled against us by our former allies. Our commitment to the Agenda of Alliance, co-authored by (BJP national general secretary) Ram Madhav & (and) endorsed by senior leaders like (Union Home Minister) Rajnath (Singh) Ji never wavered. It is sad to see them disown their own initiative & label it a ‘soft approach’,” she wrote on Twitter.
In a series of tweets, the PDP president said the measures taken by her government to restore confidence on the ground were “recognised and endorsed” by the BJP.
“Status quo on Article 370, dialogue with Pakistan & (and) Hurriyat were a part of AoA (Agenda of Alliance). Encouraging dialogue, withdrawing cases against stone pelters & the unilateral ceasefire were much needed measures to restore confidence on the ground. This was recognized & endorsed by BJP,” she said.
Slamming her former alliance partner, Mehbooba said the allegations levelled by Shah at a rally in Jammu yesterday, had no basis in reality.
“Allegations of discrimination against Jammu & Ladakh have no basis in reality. Yes, the valley has been in turmoil for a long time & the floods of 2014 were a setback, therefore needed focused attention. But that does not mean that there was any less development elsewhere,” she said.
Shah had yesterday said that the BJP’s decision to pull out from the state government was taken in view of the deteriorating law-and-order situation and failure of the state government to ensure an equitable development, especially of the Jammu and Ladakh regions.
Mehbooba asked the BJP to review the performance of their own ministers, who, she said, had no such concerns during the last three years and never talked about the ‘discrimination’ at the state or central level.
Talking about the state government’s handling of the sensational Kathua rape-murder case, she said it was her duty to not handover the case to the CBI and issue orders not to harass Gujjar and Bakarwal communities in order to provide a sense of security to them.
“Not handing over the Rasana rape & murder case to CBI, getting the pro-rapist ministers removed & also issuing orders not to harass the Gujjar & Bakarwal community in the guise of anti-encroachment drives were my duties as CM to provide a sense of security to both communities,” she said.
The former chief minister also hit out at the BJP over their senior leader and MLA Chowdhary Lal Singh’s ‘threat’ to Kashmiri journalists and asked what was the party going to do about him.
“After expressing concern about freedom of expression in J&K following Shujaat’s murder, their MLA, notorious & even punished for his role in the aftermath of the unfortunate Kathua case still threatens journalists belonging to the valley, so what are they going to do about him?,” she asked.
Singh, a former minister in the Mehbooba-led cabinet, had recently alleged that Kashmiri journalists have created “an erroneous atmosphere” and warned them to draw a line or face the fate of ‘Rising Kashmir’ editor Shujaat Bukhari, who was shot dead by militants.
(AGENCIES)