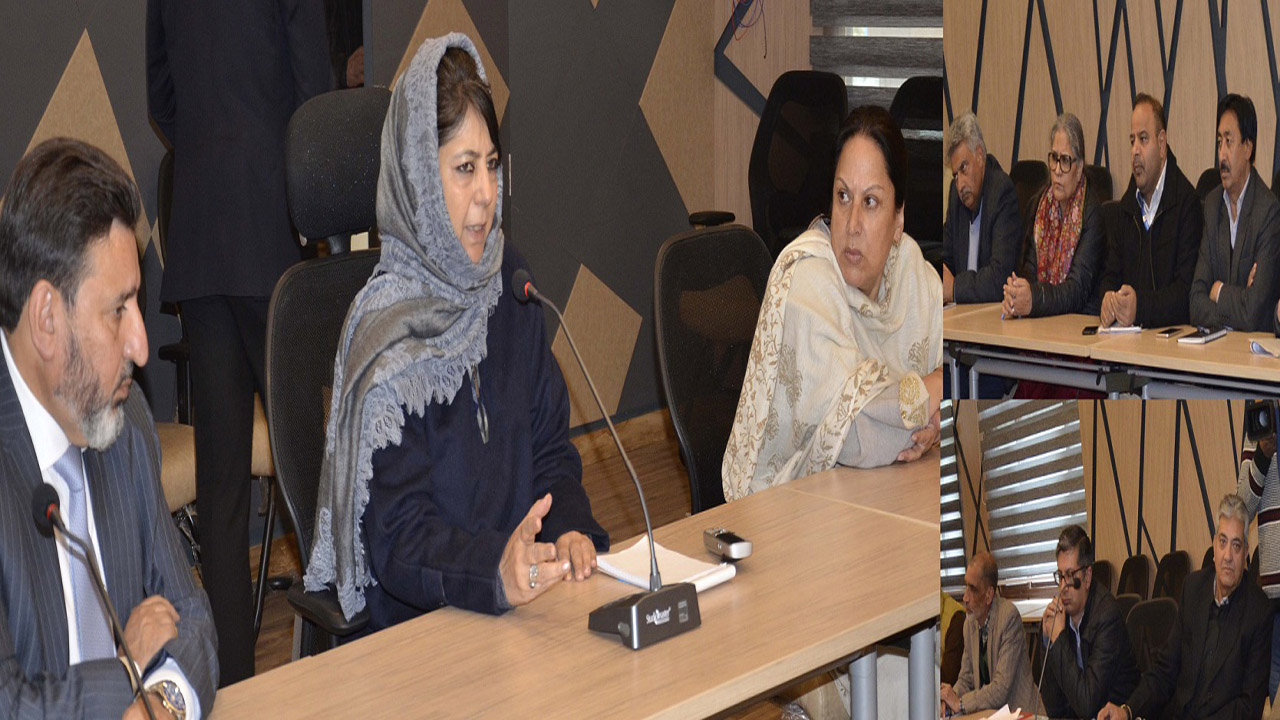 INTACH to come up with drawings within two days; regular prayer from Thursday after laying of new furnishing

SRINAGAR: Chief Minister, Mehbooba Mufti today directed conduct of safety audit of shrines in the Kashmir Valley by the concerned Departments and immediately taking all fire prevention measures at these places.

Chairing a high-level meeting to review the safety and protection of all the shrines of the Valley in the backdrop of last night’s fire incident at Khankah i Mou’la, the Chief Minister directed all concerned Departments like Wakf Board, Fire & Emergency Services, PDD, PHE, Police, SMC and other related Department to jointly conduct the safety audit of all the shrines and come up with whatever precautionary measures are required to protect these places of reverence.

Mehbooba Mufti directed installation of fire hydrants, smoke alarms, CCTVs and other precautions to prevent fire occurrence at any shrine in the State.

The Chief Minister, who is also the chairperson of the Wakf Board, directed immediate start of restoration work at the Khanqah i Mou’la shrine and complete it within the shortest period. She asked the INTACH to come up with the drawings within two days so that restoration work is started. She said money would be no constraint in the completion of restoration works at the shrine, which she described as civilizational soul for the people of the State.

Mehbooba Mufti noted with satisfaction that with the joint efforts of the local administration and people of the area, the fire at the shrine complex was not let to spread. She expressed her deep appreciation for the local youth who came forward and prevented the fire from spreading while directing the local administration to prepare list of such volunteers so that they would be suitably rewarded.

The Chief Minister was informed that regular prayers at the shrine would commence from Thursday after completing the cleaning, drying of floor and laying of new furnishing at the shrine.

The Chief Minister also directed the concerned agencies to expedite the restoration works at the Hazrat Peer Dastageer  sahib shrine (R.A.) at Khanyar so that the devotees are facilitated at the earliest.

On the occasion, the INTACH and JKPCC offered to do restoration job at the shrine free of cost in view of the importance of the shrine for the people of the State.

The meeting decided that Deputy Commissioner, Srinagar would monitor and supervised the restoration works at the shrine personally to get these completed in time.

Earlier in the day, the Chief Minister, cancelling all her engagements at Jammu, air dashed to Srinagar to personally assess the damage caused by fire at the shrine. She went round various areas of the shrine complex to assess the quantum of damage and sought a detailed appraisal from the local administration regarding the fire incident.

Interacting with the members of the management committee and devotees, Mehbooba Mufti said the shrine of Hazrat Amir i Kabir (R.A.) symbolizes the pluralistic ethos of Kashmir society from which every citizen of the State draws spiritual solace. She expressed her deep appreciation for the local youth who came forward and prevented the fire from spreading.