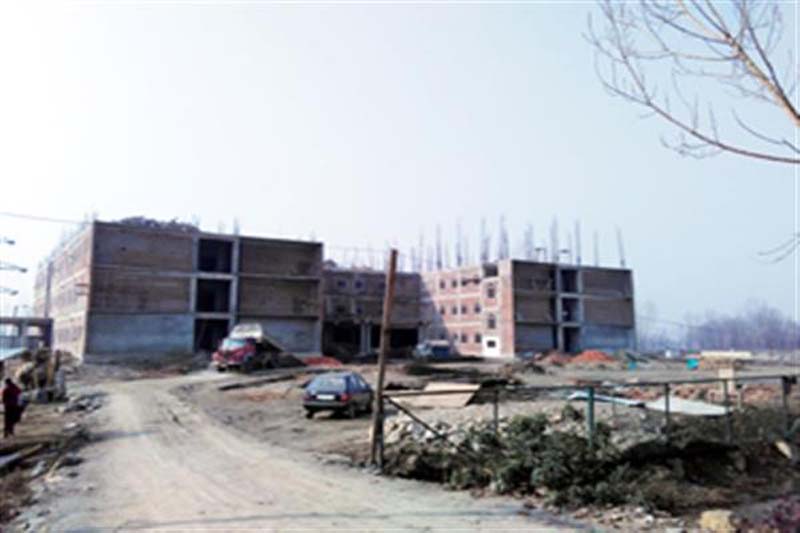 SRINAGAR, Nov 22: The Mother and Childcare Hospital (MCH) Bemina is likely to miss 5th deadline by the end of this year as the facility stands incomplete at Bemina area of Srinagar.
“The newly constructed hospital will be very useful for patients of whole Valley as it is located at a convenient place. The hospital is located on the National Highway, so the patients will prefer it rather than other hospitals in the congested areas of Srinagar,” a health official told Excelsior.
Going by the performance of the Roads and Building Department, the project is unlikely to be completed in near future. The agency has missed four deadlines on the project and is likely to miss another one this year. This would be the fifth deadline the department has missed since project started in 2013.
Chief Engineer Roads and Buildings Department told Excelsior that changes in the project delayed the completion. “Some little changes are to be done. Main building is complete and only finishing works are underway,” he said.
Earlier, he added, the hospital was proposed to be a 200-bedded maternity care hospital but Government added a childcare block to it in 2015. Former Chief Minister, Mufti Mohammad Sayeed on October 17, 2015 laid the foundation stone for 500-bedded Mother and Child Care Hospital.
Another official at the department, however, blamed paucity of funds for its failure to complete the project. “The pace of work depends on the flow of funds. Unless we receive hundred percent funding, we cannot complete the construction work,” he said. Another reason for the delay, he said, was the devastative floods of 2014 in which the work was affected.
Even if the hospital gets completed its functioning may get further delayed owing to a tussle between two premier health institutes-Sher e Kashmir Institute of Medical Services and Government Medical College – over its control. The GMC which controls majority of the associated hospitals in Srinagar wants to add to its list while as SKIMS see it as an opportunity to extend its offshoot, SKIMS Medical College and Hospital.