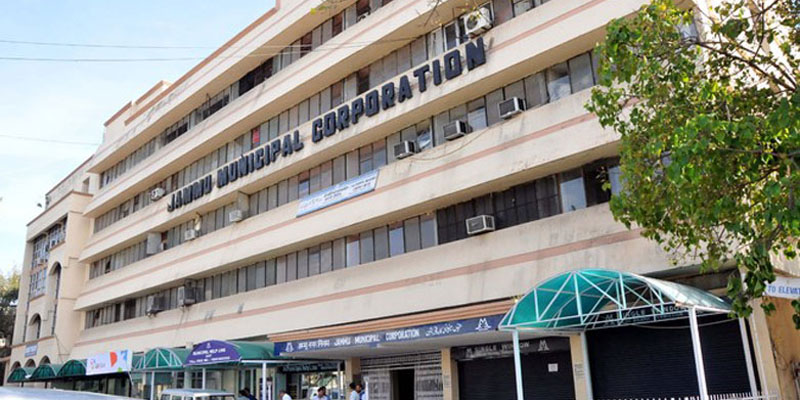 JAMMU, Sept 24: At a meeting of J&K BJP here today, the Mayor of Jammu Municipal Corporation (JMC), Chander Mohan Gupta along with Deputy Mayor, Purnima Sharma resigned from their posts and expressed willingness to work for their political party- – the BJP.
The meeting which started at 12:30 pm and continued till 2:30 pm at a Club in Jammu city was chaired by BJP J&K president, Ravinder Raina and was attended by BJP J&K Secretary (Organisation), Ashok Koul and former Deputy Chief Minister Kavinder Gupta along with JMC Councillors from BJP.

click here to watch video
When contacted, J&K BJP chief, Ravinder Raina told the Excelsior that no name for the new Mayor and Deputy Mayor has been finalised so far.
“However, the exercise in this regard will start from tomorrow at 3 pm at BJP J&K office where party Councillors will be asked to give their opinion which will be then presented before the senior party leaders to make a consensus,” he further said adding that the process might be finalised in the upcoming Navratras.
When asked why the present Mayor and Deputy Mayor have been ousted, Raina said that they have not been ousted but their tenure of two and half years, which was set at the time they both assumed their offices, was over much before but still they were allowed to continue as it was COVID-19 pandemic that time.
“Now as the COVID is over, the Party has decided the change and Mayor along with his Deputy have also agreed to that,” he maintained adding that the duo might be given some responsibility in the party keeping in view the upcoming elections to J&K Legislative Assembly.
Sources informed that BJP Incharge of J&K, Tarun Chugh may chair the meeting of JMC Councillors tomorrow in which their views might be taken to make a consensus on new Mayor and Deputy Mayor.
It is pertinent to mention here that BJP had won the Urban Local Body elections of JMC in 2018 with its 43 candidates getting success along with 18 Independents and 14 from the Congress in a House of 75 Councillors and the election for JMC was held after a gap of 13 years at that time.
Chander Mohan Gupta and Purnima Sharma were then made Mayor and Deputy Mayor respectively on November 15, 2018.
Now, as nearly four years of the elected Urban Local Body are over, the public is still facing problems like street lights, proper garbage disposal system, sanitation problems, stray animal menace, power-water crisis etc.
There was a lot of resentment against the BJP Mayor Chander Mohan Gupta and Deputy Mayor, Purnima Sharma and allegations of corruption in the Local Body remained talk of the town.