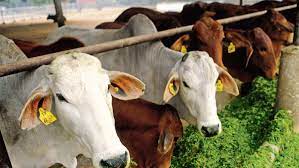 Washington, Aug 7: An Indian American veterinary doctor has called for mass vaccination of cattle and immediate restriction on their inter-district movement to prevent the spread of lumpy skin disease in India.
More than 3,000 cattle in Rajasthan and Gujarat and over 400 in Punjab have died due to the disease.
Members of the Rajasthan Association of North America (RANA) have galvanised themselves over the past few days to extend support the farmers in their home state in their efforts to save cattle from the disease.
Mass vaccination of cattle and putting an immediate stop on their inter-district movement are the two major steps that are needed to prevent any further spread of the deadly disease, Ravi Murarka, President of the American Association of Veterinarians of Indian Origin told PTI on Saturday.
Murarka, who hails from Rajasthan, is also the chairman of the animal welfare community of RANA.
Describing the outbreak of the disease during the monsoon season as a “perfect storm”, Murarka said talks have been initiated with experts on how to tackle the disease and send relevant vaccines to India at a quick notice.
“The situation is very serious in Rajasthan right now,” Murarka said, adding that the death of cows on a mass scale would have a devastating impact on the farmers and economy.
“It’s important to control mosquitoes or keep the vector away from susceptible animals. Animals at risk should keep indoors at night to be away from mosquitoes. Avoid any transportation of animals at night. Brushing animals at risk with lime, quicklime or slaked lime that forms a layer on skin and decreases the ability of mosquitoes to reach the skin is advisable,” he said.
“I think, if we follow these measures, maybe it will be help to control the disease,” Murarka said. (PTI)