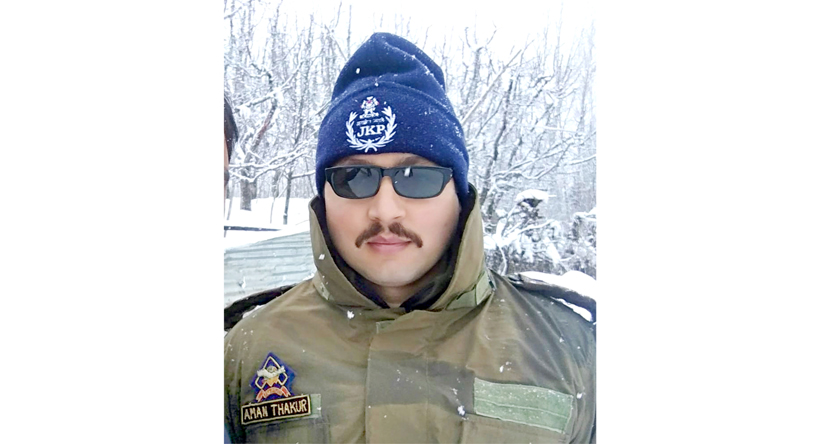 Nishikant Khajuria
JAMMU, Feb 24: As the tentacles of terror claimed the life of another young officer of J&K Police, who made supreme sacrifice while fighting for restoration of peace, friends and colleagues of the martyr recalled his passion for duty, valour, simplicity and helping nature.
Deputy Superintendent of Police, Aman Thakur, who was in his late 30s, made supreme sacrifice during an encounter with heavily armed terrorists at Kulgam in Kashmir, this afternoon. A resident of village Gagla Sar in Kastigarh area of district in Doda, Thakur was a 2011-batch Jammu and Kashmir Police Service officer. He is survived by aged parents, wife Sarla Devi and six-year-old son Arya. The body of martyred DySP is likely to reach Jammu tomorrow morning around 9.30 a.m and according to the family members, the cremation will be held with full Police honour at Cremation Ground Marh, around 3 pm.
A pall of gloom had descended at the house of his brother at Nagbani in Jammu, opposite Goenka School, where elderly parents of the martyr and his wife are staying. As soon as the shocking news of his martyrdom reached the family members through different sources, no one had the courage to console each other.
Relatives, friends, batch mates and senior Police officers rushed to the Nagbani residence where everyone was in tears and shock. “I could not face uncle (father of Aman Thakur) and console him, who was in a state of shock,” said Rajinder Manhas, a close friend of the martyred Dy SP, who along with other buddies had reached Nagbani residence of the family.
So great was his passion for police force that Aman Thakur gave up two Government jobs to don the uniform. After Post Graduation in Zoology from Jammu University, he first got a job in the Social Welfare Department and was later appointed as Lecturer with Education Department. He always wanted to be in the Police force and he had a passion for wearing the uniform, one of his close friends in the Police said. One of his two brothers is also in Indian Reserve Police while another one is a Lecturer in School Education Department. “Aman was youngest among us and hence was most loveable in the entire family,” said his elder brother Suresh Goria in a chocked voice and pleaded that he could not speak more at that time.
Director General of Police Dilbag Singh also could not hold back his emotions while recalling his various meetings with the young police officer. “He was always beaming with enthusiasm and used to lead his team from the front,” Singh said. During his tenure in the militancy-infested Kulgam district of South Kashmir, DySP Aman Thakur, son of Swami Raj, won laurels from many quarters. He had been heading the counter-terrorism wing of Jammu and Kashmir Police in district Kulgam from last one-and-a-half years and had played an instrumental role in killing dreaded terrorists in the area.
Aman Thakur was also part of the security forces’ team, which eliminated three Jesh-e-Mohammad terrorists, including their operatonal commander on February 19. “We had telephonic talk on the same evening and he was sad over the martyrdom of Army Major in that operation and today he himself attained martyrdom in a similar encounter,” said Dr Rahul, a class mate of Aman Thakur of university days.
His other friends also recalled him for his simplicity, plain-speaking and thorough professionalism. “He was known for his determination and velour. In a short period of time, he had earned love, respect and appreciation of the locals in the area for his helpful nature and professionalism,” one of the police officers recalled. Aman Thakur was awarded DGP medal and commendation recently for his outstanding contribution. He was also awarded Sher-e-Kashmir Medal for Gallantry in recognition of his bravery and courage in anti-militancy operations. Jammu and Kashmir Governor Satya Pal Malik has expressed grief over Thakur’s demise. He expressed sympathy and solidarity with his family members. Aman Thakur and an Army jawan attained martyrdom in the encounter in Kulgam district of south Kashmir on Sunday. An army Major and two soldiers were also injured in the encounter. Two Jaish-e-Mohammed (JeM) terrorists were eliminated by the security forces in the said encounter.