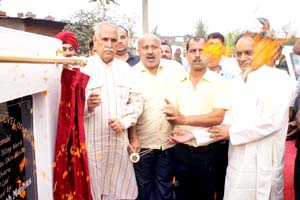 JAMMU, June 19: Member Parliament, Rajya Sabha, Shamsher Singh Manhas today dedicated newly constructed lane and drain along with tiling work to the public at village Khada in block-Purmandal of Jammu district.
Manhas, while addressing the people, said that the newly constructed lane and drain along with tiling work near Shiv Mandir at village Khada, was a long pending demand of the locals who apprised him regarding the issue some time back.
“I had immediately released fund to the tune of Rs 7.83 lakh from my Member Parliament Local Area Development (MPLAD) Fund for the construction of the said work which is ready for the public use now”, Manhas added.
He also said that the BJP in Jammu and Kashmir is committed to carry forward the slogan ‘Sabka Sath Sabka Vikas’ given by the Prime Minister, Narendra Modi, to the doorsteps of the public. He urged upon the people to come forward and avail various welfare schemes launched by the Central Government as well as the State Government.
On the occasion, Naib Tehsildar, Mohd Ismael, JE, Block Purmandal, Digvijay Singh, BJP State executive member, Subash Bhagat, BJP district president, Jangbir Singh, ex-block president, Parshotam Singh and block president, Kulbir Singh were also present.