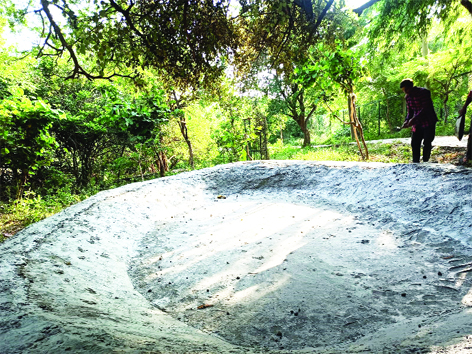 Shiv Chander Sharma
Manda Green, a group comprising of morning and evening walkers in the Manda forest on the outskirts of Jammu city opposite to Hari Niwas hotel and Amar Palace, and adjoining the Manda Deer park is working for the welfare of the wild animals and the birds and other inmates of the forest in the officially called Ramnagar Wildlife Sanctuary.
Besides planting fruit and medicinal plants and variety of flowers at various places right from the starting point , some water bodies have been constructed on the walking track for the animals and birds with the active support of J&K State Wildlife department under which Sanctuary falls. The department on its own has planted more than 2000 plants during the plantation drive this rainy season which have started growing. They also planted grass for grazing purposes for the wild animals in the Sanctuary.
A regular walker Arvind Khajuira and president of the Manda Green group, who is among the active walkers devoted in constructing water bodies and plantation of various plants said that hundreds of Jammuites have been coming daily for walk in the morning and evening hours to soothe their body and mind to remain physically and mentally fit. Females and children of all ages are also among the walkers who come to the forest in large number.
But few of the walkers felt the need of fruit plants and water bodies for the wild animals and birds. A walker Rajinder Singh Jamwal took the first initiative way back in 2010 by planting a variety of fruit plants near the famous Wazir point, a stop on the trail, where people take rest and do exercises and perform Yoga during their walk. This point is half way of the trail.
Jamwal alone started this campaign of planting several fruit plants including mangoes, Falsa, orange, Amla and other citrus fruits. However, later few other walkers joined him and the campaign got a boost. Later, he was joined by General secretary of the Group D P Saini and another walker Darshan Saroch and some others who worked hard, said Arvind Khajuira. Recently, a new large water body (pond) has been constructed, hardly half a kilometer from the starting point, he said.
Elaborating further, Darshan Saroch and D P Saini said that earlier a lush green park comprising of variety of flower and a small pond was developed by the walkers with financial contribution of like-minded walkers. Besides the park and water body, many plants having medicinal value were planted which include Amla, Bahera, Arjunshaal, Kathal, Elaichi, Neem. Banyan trees and Maringa. In addition, fruit plants including mangoes, oranges citrus fruits, guava etc have grown up along the trail on both sides right up to the last point called Lohar, where large water reservoirs have been constructed by Jal Shakti department for supplying water to the city population.
The Wild Life Department has constructed resting points and cemented platforms, rains sheds at several places along the track and steel benches have been fitted for the walkers to enjoy the nature, deep inside the lush green forest all along the track where walkers do Yoga perform exercises and do meditation at various spots. Large number of walkers of all ages come here to keep fit. The walkers start coming to the walkers’ paradise in Jammu city during wee hours till late in the evening.
An official of the Wildlife department said that before 1947, this place was hunting place for the Dogra rulers, their family members and guests. Several spots were developed by the kings for the purpose and some water bodies were constructed to attract the wild animals for hunting. However, later when Jammu and Kashmir became part of India and democratic government came into existence then approximately 12.5 square kilometer area of this forest was declared as Wildlife Sanctuary.
Normally , entry of people in any Wildlife Sanctuary is restricted. However, as this forest has been in use for walking by Jammuites much before 1947 entry was allowed with the conditions of not bringing axes, pets, knives etc to cut the twigs of the trees or damaging them, the official said adding that this forest has several species of animals and birds including leopards, deer, peacock, cock besides many others.
Street lights have been installed by the State electricity department on the entire 3.5 kilometer long trail which are being maintained by the walkers by replacing fused bulbs, damaged switches etc. Large number of people can be seen walking in this forest trail all during the day in all the seasons but heavy rush can be seen during morning and evening hours. Jammuites are lucky to have this thick forest with -in the city, said another walker Kamal Sharma.