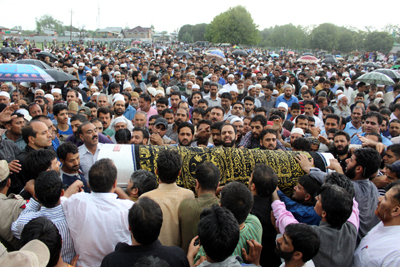 Fayaz Bukhari
SRINAGAR, June 15: Police today arrested a suspect in connection with the killing of journalist Shujaat Bukhari and two of his Personal Security Officers (PSOs) while three main suspects are still at large.
Inspector General (IG) of Police Kashmir, Swayam Prakash Pani told reporters this evening in a press conference that the suspect has been identified as Zubair Qadri.
The IGP said that Qadri was seen in the video stealing the pistol of the PSO, who was shot dead along with Bukhari.  “The pistol has since been recovered and he is being questioned about his presence at the scene of the crime. So far, he has not been able to give any convincing answers,” he said.
Earlier in the day, police released the video of a bearded man who was apparently trying to help the injured in Bukhari’s car after attackers fired a volley of automatic gunfire at him. This man was picking up a pistol from the site after which he escaped.
Click here to watch video
“Police had formed a Special Investigation Team (SIT) under Deputy Inspector General V K Virdi to probe the killing of the editor of Rising Kashmir yesterday”, he said.
Pani also described the killing of the journalist as a “terror attack”. “The identity of the other three attackers was being ascertained”, he said.
Police sources suspected Lashkar-e-Toiba (LeT) hand behind the killing of Bukhari and said the group was led by Naveed Jutt alias Abu Hazulla, the LeT commander, who escaped from police custody early this year.  But LeT in a statement issued here strongly condemned the killing and instead blamed “Indian Agencies” for the same.
Earlier, police released picture of three men on a Motorcycle who, they say, are the suspects, who killed Bukhari and his security guards.
Bukhari along with his two PSOs was killed last evening as soon as he got into his car from his office at Press Enclave in Srinagar.
Earlier in the morning, Bukhari was buried at his native village in Kreeri area of North Kashmir’s Baramulla district.  Amid intermittent rain, thousands of people from all walks of life participated in the funeral.
Chief Minister Mehbooba Mufti, Finance Minister Altaf Bukhari, Tourism Minister Tassaduq Hussain Mufti and other Council of Ministers, Former Chief Minister Omar Abdullah, separatist leaders Abdul Gani Bhat and Mohammad Yasin Malik and large number of journalists participated in the funeral.